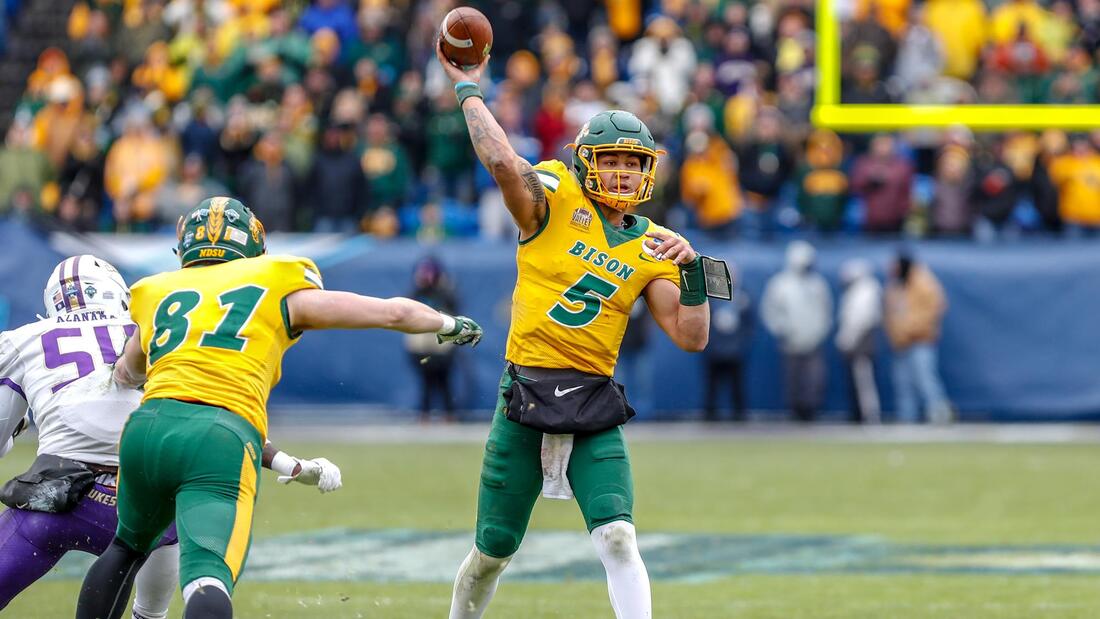 Trey Lance is one of the most exciting players in this entire draft coming from a not-so small football school in North Dakota with his ability to play as dual threat quarterback which is taking over the league. The 6'3" and 225 lbs. quarterback is one of the most dangerous quarterbacks in this draft class when it comes to extending plays with his legs which he did a lot of in 2019 playing for the Bison's. He's the most muscular quarterback in this class with a thick and compact frame and plenty of speed and leg strength to break a tackle on a read-option and take the ball into the end-zone. He's tough a runner at the quarterback position as you'll find and even has some highlights that would make even Marshawn Lynch impressed. He's got a great arm and tremendous accuracy to go along with it. Does an excellent job of hitting his receivers in stride, especially on deep throws, and has tremendous touch on his passes which seem to fall right into his receivers hands. Very accurate throwing from the pocket and does a great job of keeping his throwing mechanics consistent and reading the field quickly. Throwing on the run is where he's his most dangerous due to the threat of him taking the ball and running with it. He's very accurate on the run and does an excellent job of quickly reset his feet and bullet a throw into a receivers arms. Does a great job of commanding the offense pre-snap by identifying blitzers and reading coverage's as well communicating to his receivers when he scrambles out of the pocket and guiding them to where he wants to throw the pass. He has great touch on his passes and his shorter arms and compact frame allow him to zip the ball out quickly. He has a great sense for incoming pressure and does an excellent job of being patient in the pocket and not taking off too early. He's one of the best, if not the best, at keeping the ball out of the defenses hands with having zero interceptions in 2019 despite starting the entire season. He's a menace in a goal line scenario who will exponentially increase a teams touchdown numbers in the red zone as he does an excellent job of taking what the defense gives him and plunges into the end zone on a running play or lasers a pass to receiver. He's probably the hardest quarterback in college football to bring down because he's got so much power in his frame and has on multiple occasions shredded tackles from defensive lineman and still made a play. He's probably the toughest quarterback in this draft as well because not only does he take shots from defenders like a man but he will on occasion give them back and never seems to get tackled by one man ever.

He hasn't played against the top college football programs with his division being the MVFC conference and I would like to see how he does against a ranked team. He has only started for one year of college football and has only played against colleges whose programs aren't even subpar compared to his. He can at times focus on his first read too long and while he usually makes a completed pass, any NFL defender will pick up on that and make his life a living hell. He's too eager to seek out contact, given his time playing against bad teams, and if he tries to do that in the NFL he'll get crushed and shorten his career: Just ask Andrew Luck. He's got a good but not great arm in terms of strength and isn't going to stretch the field unless he puts all might into the pass. His mechanics and footwork could use some polishing inside the pocket as he plays in an offense that features a lot of shot gun and read option which is still making its way into the NFL but hasn't arrived yet. Didn't play in 2020 due to Covid-19 concerns with the program and will mainly be judged on his 2019 film.

He's a fast rising prospect on many draft boards I could easily see getting drafted inside the top 10 of the draft. North Dakota State has produced more than a few good quarterbacks over the last couple years and Trey Lance could end being the best of all of them. If he can fix his do or die mentality when he runs with the ball and get some more coaching on his ability to read the field and check on his targets more often, he'll find himself having tremendous success. He's a unique quarterback prospect with an incredible upside and could end up being the steal of the draft if paired with the right coaching staff.