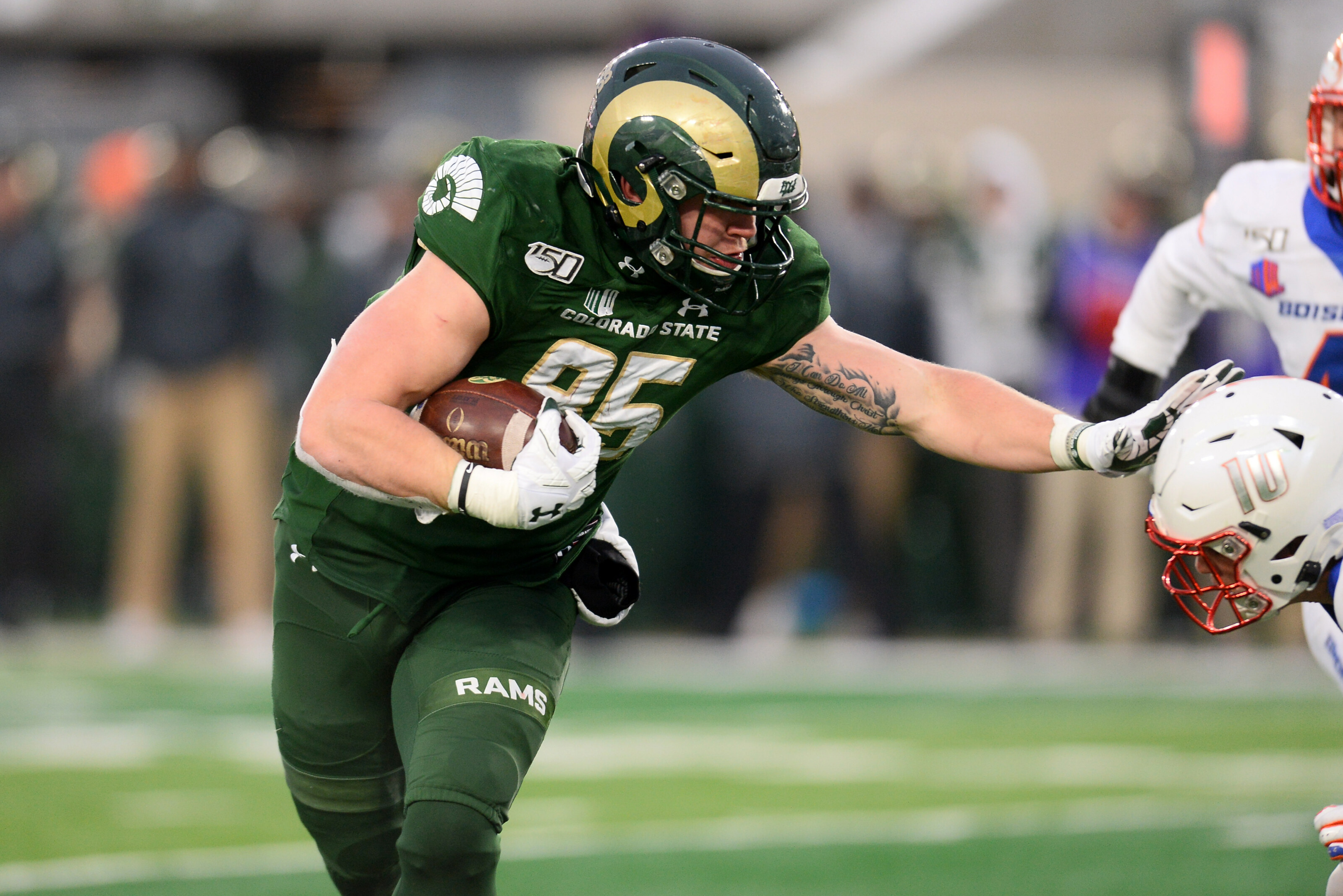 Photo by Ron Chenoy-USA Today Sports
No tight end in college football had a more productive season than the 2021 John Mackey award winner, given to the college football's best tight end, Trey McBride whose outstanding play has certainly earned the eyes of all 32 teams. At 6'4" and 260 lbs., McBride brings a rocked up muscular frame with excellent athleticism, versatility, and some of the best hands in college football. He possesses exceptional straight line speed and agility for a man of his size and is capable of burning defenders if he has green grass in front of him. McBride might possess a pair of the best hands in college football as the ball seems to just stick to his hands when it touches them. He's a hands catcher as a receiver with very few instances of catching with his body and his hand eye coordination for a receiver with his ability to catch tipped passes which he has done on a few occasions. He's very fast for his size, has great power in his frame, and exceptional body control in the air with his ability to get his feet down in bounds when near the sideline. He holds onto catches through contact with his strong grip and there are plenty of instances of him getting popped in the air and still holding onto the catch, which is a testament to not only his hands but also his toughness. While he's certainly not the most polished route-runner he does have a knack for getting open in zone coverage by reading the defensive coverage and sitting in the hole they leave behind, allowing his quarterback to use him as a safety valve when the pressure becomes too much to handle. He possesses a very large route-tree that saw him running all over the field. He's very good after the catch as he seems to always make his first tackler miss. He's a tough tight end to bring down and often requires at least two defenders to tackle him. He's very willing to fight through contact to pick up yards and has taken big hits from defenders and powered through them to move the chains. He's very good at putting into position to come down with contested catches. He has a good catch which is made even better by his elite hands which were very helpful due to poor accuracy from his quarterback. He lined up all over the field for the Rams offense with ample snaps in-line, in the slot, both X and Y receiver, full back, as well as half back and he excelled at all of them, showing a good football IQ for a prospect. He was a very good blocker for the Rams with technically sound form and his aggression when he makes contact with defenders and he could often be seen blocking downfield to keep big runs going for his running back. He was good at turning his opponent out of the hole on stretch towards his inside gap and was very useful at times as a lead blocker with athletic traits. The Colorado offense heavily relied on him to keep them in games with the amount of targets they gave him and his consistent production in games shows just how effective was when they needed him most. He was Colorado State's big play guy when they needed to stay within games and often was successful for them with big YAC plays and clutch catches to move the chains or put points on the board. He's a relentless worker that plays with tremendous effort and passion which can be seen both on and off the field.

Trey McBride is far too often making contested catches due to unpolished route-running and struggles to get good separation at the top of his route. Not much of a pancake artist at the tight end position and I would like to see him finish more of his blocks in the secondary. His efficiency in the red zone is questionable with only one touchdown in the 2021 season likely due to his deficiencies as a route-runner considering that separation and fluid routes are needed to get open in the end zone.

Trey McBride has the potential to be a monster in the NFL with his excellent size and athletic traits and while many have listed as a Day 2 pick in the draft an excellent combine and/or senior bowl could see him skyrocketing up draft boards. He's built to not only play pro football but thrive at it and if he can continue to polish his technique as a route-runner and learn how to finish blocks he could capitalize and maximize his potential. He's a Day 1 starter at the tight end position and if he grinds in practice to develop his route-running and blocking further, he could be a quality tight end and potential pro bowl player.