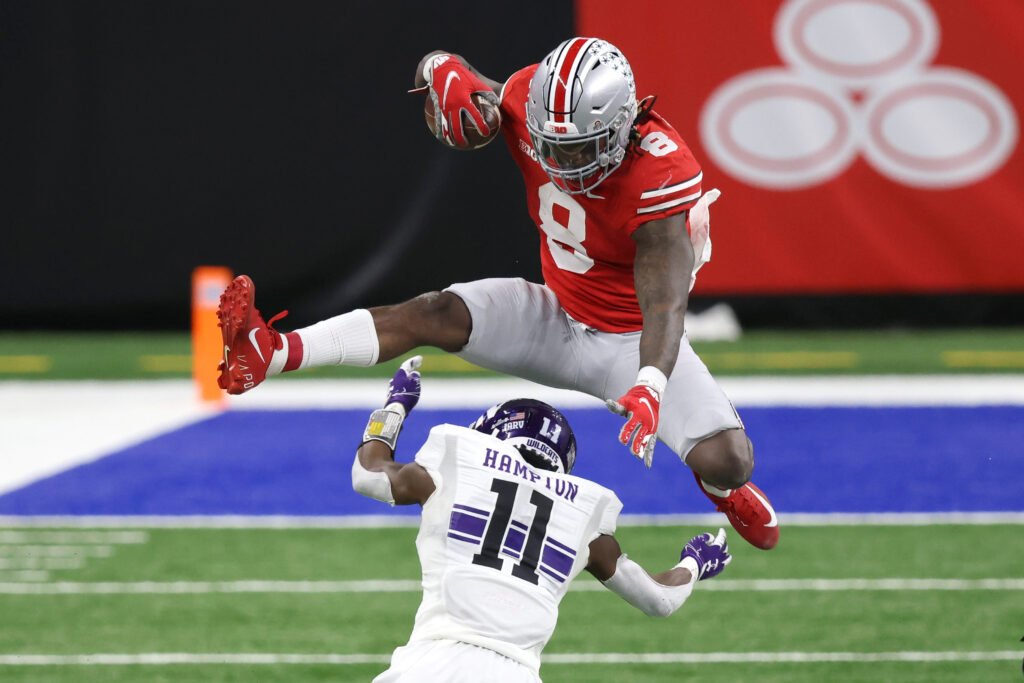 There was no hotter running back in college football in 2020 than Trey Sermon from Ohio State and if he hadn't gotten injured early in the College Football Championship game in 2020, it's not far-fetched to say that the Buckeyes would have potentially won. Sermon brings a prototypical build for a running back at 6'1" and 215 pounds with excellent athleticism and frightening toughness. He's bruiser of a running back who relishes creating contact and has on more than one occasion blown up a defender that's in his way. He's a very difficult running to bring down as he brings a great deal of power throughout his frame. He proved to be one of the best running backs in college at running through contact and picking yards by moving forward. He's very agile in short areas by juking away form defenders and finding the holes they leave open. He possesses excellent ball carrier vision when attacking the holes his line opens up and makes sure that he makes the most of his opportunities. He has a very effective stiff arm that can break defenders off of him. He's very good at reestablishing his footing when breaking tackles and rarely gets tackled by the first guy that touches him. While underutilized as a pass catcher, he seems to have good hands and a good feel for running after the catch. He's a highly explosive running back who can turn on the jets when he sees daylight. Always is looking to find more yards and does a great job of finding the path of least resistance. He's one of the best in the draft at holding onto the ball through contact and not fumbling the football. For being a senior running back, he really hasn't been given a heavy workload in his entire college career which will help him with his longevity in the NFL.

While it's good that he hasn't been given a large workload in college, it shows that as an overall a raw prospect. He's been apart of two highly efficient offenses at Oklahoma and Ohio State, both of whom have incredibly prolific passing games allowing Trey Sermon to face undermanned front 7's in college. He spent his first two seasons at Oklahoma fighting for playing time until his junior year where he suffered a season ending knee injury and didn't have any stand out performances until 2020. He's rarely had to block in his career with his offenses being mostly spread out, limiting the amount of blitzes he sees. While he can catch the football, he hasn't had to run routes or try to get open with most if his passes coming as screen plays or safety valve passes.

Trey Sermon has the potential to be a bell cow back in the NFL and in many ways reminds me of Josh Jacobs when he was coming out of college. He's a raw but promising prospect and if allowed to split carries and develop his game, he could potentially develop into a quality every down running back.