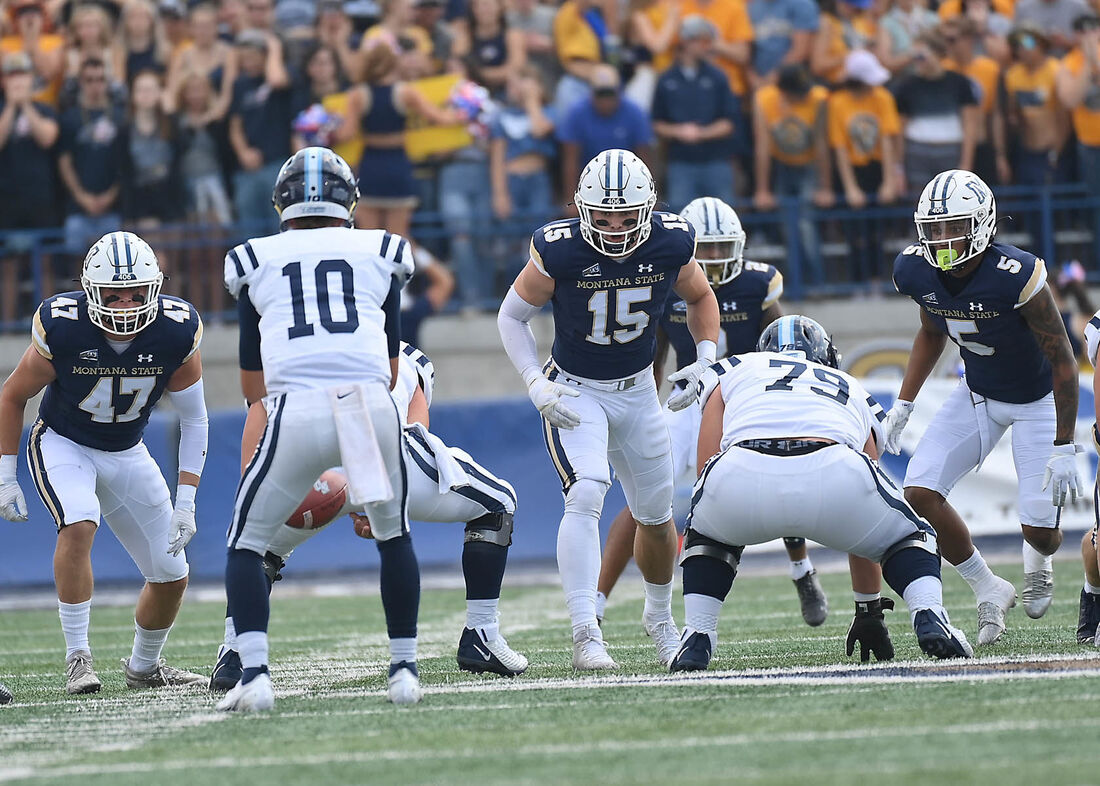 Photo by Dean Hendrickson-MSU Athletics
It's extremely rare to find a college football team use a player the way Montana State did by having star player Troy Anderson pretty much play anywhere and everywhere they could and his performance at the NFL combine certainly enlightened NFL teams about what kind of an athlete he is and what kind of football player he could be at the next level. At 6'3" and 245 lbs., Anderson possesses elite athleticism, rare versatility, and a very high football IQ. As a run defender, he never seemed to find a player on the field that could match his athletic traits and his range from sideline to sideline made running on his defense nearly impossible to succeed at. Based on his combine measurements which are backed up by his game tape, he can run down most NFL running backs as he takes good pursuit angles when making tackles and has excellent stop-start quickness to make open field tackles. He's a big hitter when he can square his target and hit them head on and does a great wrapping up and bringing down quickly. He has very strong hands that allow him to latch on and quickly throw down ball carriers and he does so with malicious intent. When he takes on blockers, he does so with nastiness and power and can effectively drive back a bit to interrupt rush lanes. As a blitzer, he comes low and fast to effectively hide himself a bit when getting into the backfield and proved to be effective at shooting through gaps opened in the trenches. He was a nightmare behind the line of scrimmage when he found his way back there with his ability to run and chase as well as change his direction on the fly and his tackle for loss and sack numbers in his last couple seasons can attest to. He has pretty good hands for a linebacker and when the ball hits his hands in coverage it usually ends up going the other way. He has the size and athleticism to match up receivers of all shapes and sizes from tight ends to slot receivers and he could be a highly effective linebacker in space for a team. His length in his arms helped him a great deal with batting away passes and disrupting throwing lanes and with the right coaching could be a special coverage linebacker for a team. He played quarterback early in his college career and switched to linebacker this past season and teams looking for potential Taysum Hill type players should have this player very high on their board. While teams will likely want him as a linebacker on their squad, it is worth noting that he can run the football very well as a prospect despite it being from the quarterback position and he could be a valuable asset on special teams, trick plays, and wildcat offenses on short yardage plays. His getup and go speed in the pocket destroyed defenses in the Big Sky conference and should give NFL teams goose bumps of his capabilities to affect games in all three phases of the game. He's a high football IQ player based on the amount of hats he's had to wear for his team as well as how fast he developed as a linebacker after playing offense his entire career. He's a high motor high effort player that will give his team 110 % of himself to win games and should be a great player to have in a locker room.

He's only played linebacker for one whole season and I worry about how much of his production was from him playing well and how much was he taking advantage of lesser athletes on the field because he truly was a man amongst boys at Montana State. His level of competition was subpar at best and never found himself facing any Power 5 team in his career at the position. He's noticeably raw at the position with his indecisiveness on defense in all phases of the game. In run defense, he can struggle with diagnosing blocking schemes and attacking the line of scrimmage effectively. Weaving through traffic in the trenches and finding rush lanes to attack the running back is an issue for him currently and learning how to find the running back in the line will likely need to be developed for him rather than improved. His coverage skills are extremely suspect as he can't decipher route concepts very well or effectively utilize his tremendous range in zone. He's easily separated from in coverage by receivers as bites on juke moves and stutter steps consistently and his doing so against subpar receivers may mean that he'll need a complete overhaul in this aspect of his game. His success as a blitzer has come from him mostly being schemed to attack against limited fronts on offense with no real attack plan or rush skill set that will make him a consistent threat on defense.

Troy Anderson is a project through and through in the NFL and his risk-reward aspect of him as a prospect are polar opposites from each other. If he hits, you might have a high quality starter on defense and special teams ace comparable to Taysum Hill of the Saints but if he falters you'll have at best a special teams player. He's extremely raw but has extremely desirable traits and it will take the right head coach with a great plan for him to fully realize his potential. I see him as a potential Day 3 selection but his popularity among NFL teams could see him be a surprise pick on the backend of Day 2.