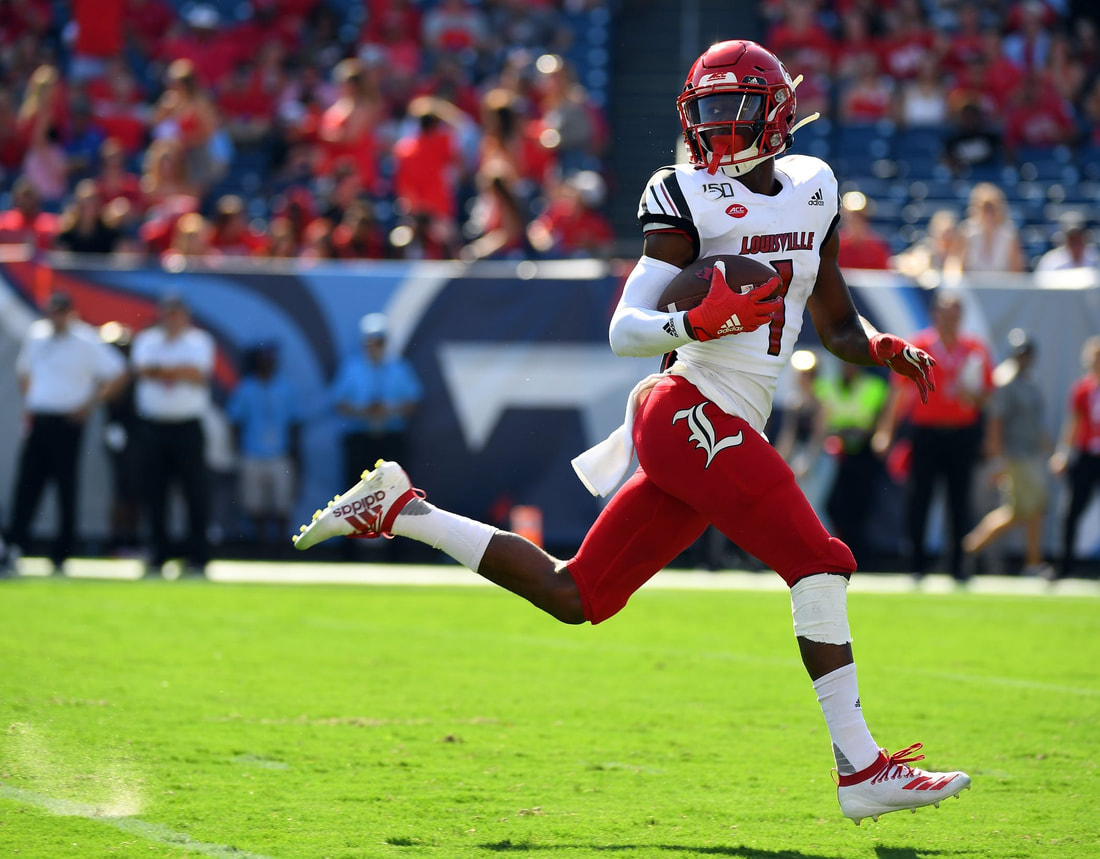 If there's a player in the 2021 draft that can break John Ross's 4.22 40 yard dash record it's Chatarius "Tutu '' Atwell from Louisville who scorched defenses deep  like few players can. He's built for speed at 5'9" and 165 lbs. and seemed to put on a track every game for the Cardinals. He's a very dangerous player to give too much room to as a corner on the outside because he gets to his top speed quickly and then seemingly hits the nitro boosters and flies by defenders. Exceptionally quick and agile and is very difficult to cover on short passes with fear of his speed causing cornerbacks to give him room. He's potentially 6 points waiting to happen any time he touches the football and has had success with taking short passes to the house. His slant-n-go route is devastating and will be effective in the NFL. Tracks the football very well and never seems to be overthrown with his speed.Very good hands and does a surprisingly great job of holding onto the football through contact. He's very elusive in the open field and does an amazing job of weaving through tackles and avoiding contact as much as possible. Extremely competitive at the catch and will fight for the football if it's contested in the air.

He doesn't have many routes in his repertoire with only his slant-n-go's and his deep routes and maybe shallow crosses and slants but nothing over the middle of the field where he could get taken out by defenders. He's not going to ever be a factor on 50/50 balls and certainly is going to need an accurate or at least big armed quarterback to throw him the ball. He doesn't have a great presence on the sideline and won't be making boundary catches anytime soon. Very tiny catch radius and mainly relies on his speed and agility to create separation and track the football rather than catching it in stride. Still learning to play the wide receiver position after transitioning from being a quarterback. Will get man-handled in press coverage in the NFL and is going to have to find ways of quickly disengaging. He's not going to be a blocker in his career. He doesn't attack the football when it's in the air but rather he lets the pass come to him which may never be corrected due to his small size and hands. His body is extremely thin, almost like a long distance runner build, and getting hit in the NFL might be a huge issue for him.

He's likely to break the 40 yard dash record in 2021 because that's how fast he is and I would be shocked if he at least didn't come close. He's got to be a great deep threat early in his career as teams will struggle with keeping up with him over the top. I think that if a team can get him working on his routes very early in his rookie year he could be an amazing asset on an offense.