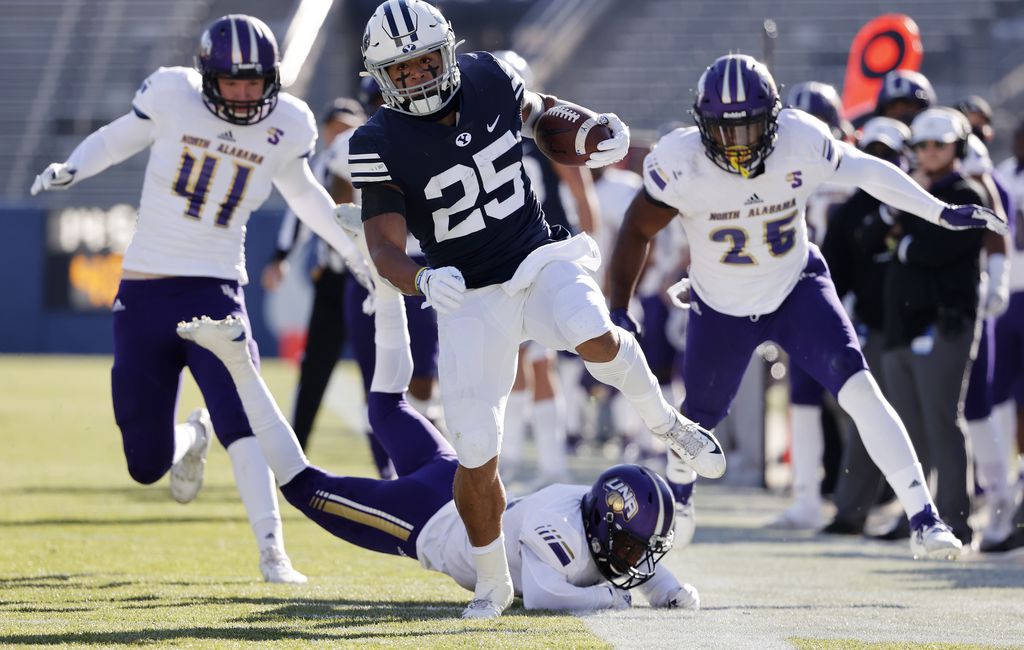 Photo by Jeff Swinger-Associated Press
Although BYU has been a passing team the past few seasons in the FBS Independent conference but after a phenomenal rushing season in 2020, Tyler Allgeier turned the Cougars into a run heavy offense with bruising style of running and exceptional athleticism and put together one of the best rushing seasons the school has seen in a very long time. At 5'11" and 225 lbs., Allgeier is built like a compact tank with a lot of power and speed in his game and certainly has a running style to match. Allgeier is one of the toughest runners in the NFL draft who relishes running through tacklers and wearing down defenses. His compact frame makes trucking defenders and withstanding head-on collisions an easy task for him. He brings the pain at the point of contact as he explodes out of the gates when he gets the ball in his chest. He hits the hole he's supposed to run into at 100 mph and any linebacker, safety, or defensive lineman standing in his way is in for a big hit once he makes contact. He's a very aggressive running back when it comes to picking up short yardage and he will fight like hell to grab every inch he can. When tasked with picking up the line to gain there were very few instances where he couldn't get the job done because his extreme competitive fire and aggression give him a "no surrender" mentality when his team needs him to pick it. He possesses excellent agility and quickness in his compact muscular frame and he has the capability to make defenders miss tackles at will and weave his way through the trenches and pick up yardage. When running in the open field, Allgeier displays the necessary agility and quickness to be a menace for defenses to tackle and he's shown to be very capable of juking defenders in the open field. He's very capable of turning the corner on outside runs and picking big chunks of yardage on pitches and stretch plays. He has a very powerful stiff arm that can plant defenders into the ground if they tackle high on him, which is often the case, and when tacklers do get ahold of him, he will drag for more yardage if they hold. He's a reliable receiver out of the backfield with good hands and instincts to go out for a pass and he's highly reliable in pass protection for his fearlessness when taking blitzers and has popped them when he squares up correctly. Tyler Allgeier still plenty tread on his tries with just under 500 touches in his career and if he continues his bruising rushing style he's plenty of life in his build to use for quite awhile.

Tyler Allgeier is a relatively unfinished product as a running back and most of his skills need polishing to maximize the most of his ability at the next level. First and foremost his ball carrier vision needs work because too often he's running into contact between the tackles when there are easier options available for him and finding holes that are opening and closing in the trenches has been a difficult task for him. He's raw as a receiving option from a technical standpoint as he doesn't know very many routes and his primary usage at BYU was simply screen pass option or safety valve. As a blocker, while very willing, he has trouble picking up blitzers in pass protection and his blocking technique does need work as a whole. I think he's a little too willing to run through defenders than trying to evade them and I worry about his longevity in the pros once he plays against NFL defenders that can level him. Not a burner downfield field and has been caught from behind by more speedy defenders.

Tyler Allgeier is going to be a fun project for a running backs coach to work with because running backs who attack the line of scrimmage and play with the aggression the way Allgeier does is what good running backs in the NFL do and he's got all the potential to turn into one. As of right now he's a two down back unless in a short yardage situation but with some good coaching and patience, Allgeier can be a very good three down running back in the NFL.