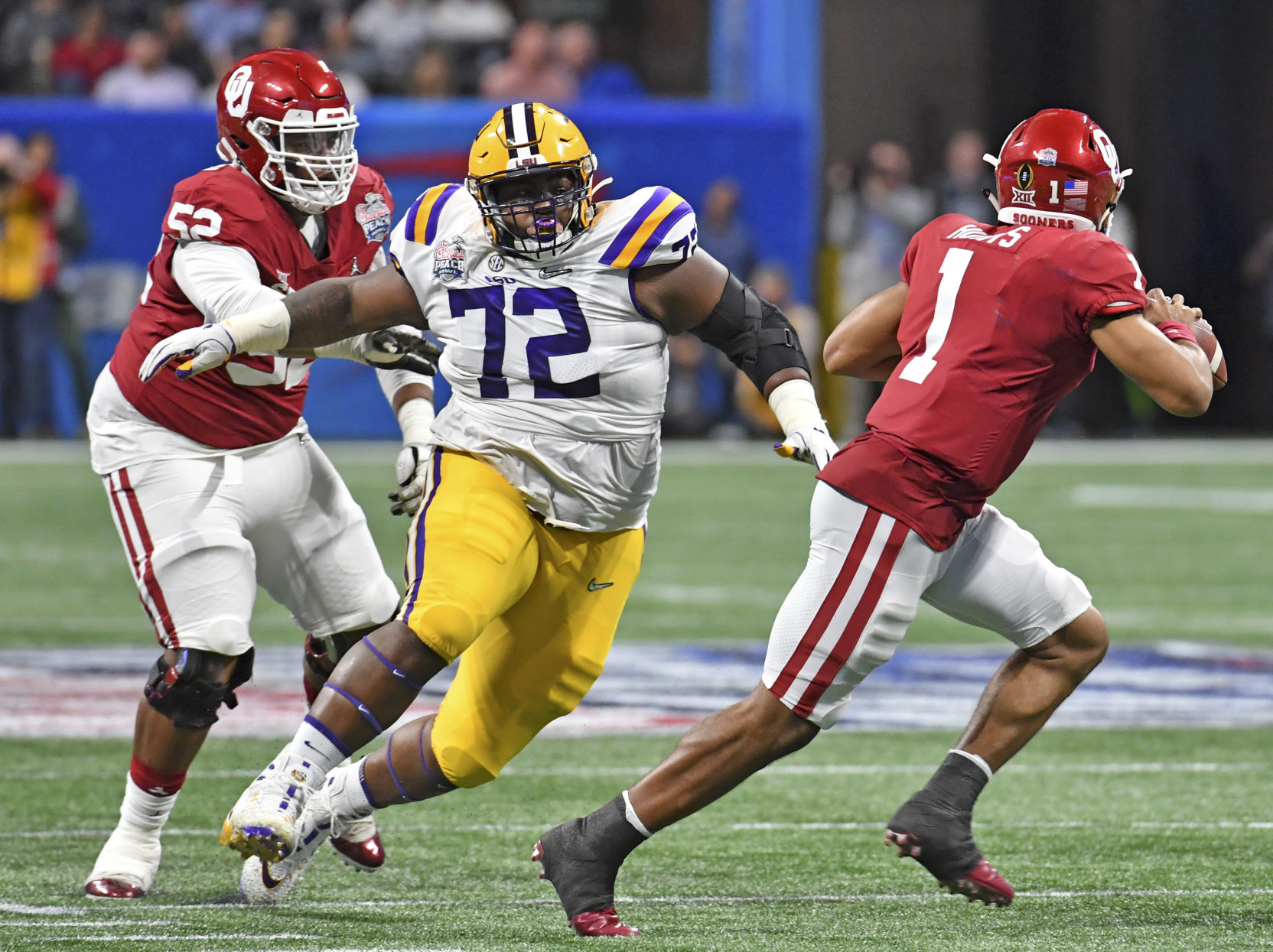 LSU Nose Guard Tyler Shelvin played like a monster last season and should be a dominant anchor for the LSU defensive line in 2021. He's a behemoth of a nose guard at 6'3" and 365 lbs. with ungodly strength and impressive quickness and agility for a man his size. He plays with a nastiness and intensity that is only a SEC nose guard and is a nightmare for offensive lines to control. He's got unreal power in his upper and lower body and on most plays he simply walks offensive lineman backwards. Offensive lines double team him constantly and still can't contain him. He's always the low-man off the snap and will send offensive lineman flying into the quarterback's lap if he gets the better leverage. He's going to be the best goal line player in the NFL once he's drafted where his size, natural low center of gravity, and power throughout his body will collapse the middle of an offensive line. He eats double and triple teams for breakfast and relishes opening up holes for his fellow teammates. He's at his best in run defense where any time a team runs the ball up the middle, the runner has to bounce outside because he simply destroys the middle of an offensive line. He's ridiculously explosive at the snap of the ball and always seems to have the better leverage when he makes contact. He's a high effort player for a man his size and will turn some heads in 2021 if he continues to impress. He's not going to produce much on the stat sheet but his presence can be felt in his fellow players as he allows them to get better match ups and helps them succeed. He has an incredible motor for a 365 lbs. man and doesn't stop until the whistle is blown. He does a great job of moving down the line of scrimmage on designed outside run plays and at least gives chase for a bit on running backs. The only player I have seen handle Shelvin in college football is Oklahoma center Creed Humphrey but considering that he's easily the best center to come out of College in almost a decade, he gets a pass for that game.

His length in his arms is questionable and could prove to be a problem in the NFL. He carries a lot of bad weight in his core, despite carrying it very well, and should consider shedding some of it to better increase his athletic ability. He's not much of a factor as a pass rusher with his size and may never find himself getting pressure on the quarterback consistently. He doesn't have a pass rush move in his arsenal yet that's consistently effective and rarely finds himself in pursuit of the quarterback.

He's a bigger, faster, and stronger version of Casey Hampton from the Pittsburgh Steelers defense of the 2000's where his job and role is to take on as many lineman as possible. Shelvin is a beast of a man as a nose guard but the problem he has is his position itself being a nose guard and the limited market that position has. Tyler Shelvin can turn any defensive line in the NFL into a top 5 run defense and that is something that teams should take notice of.