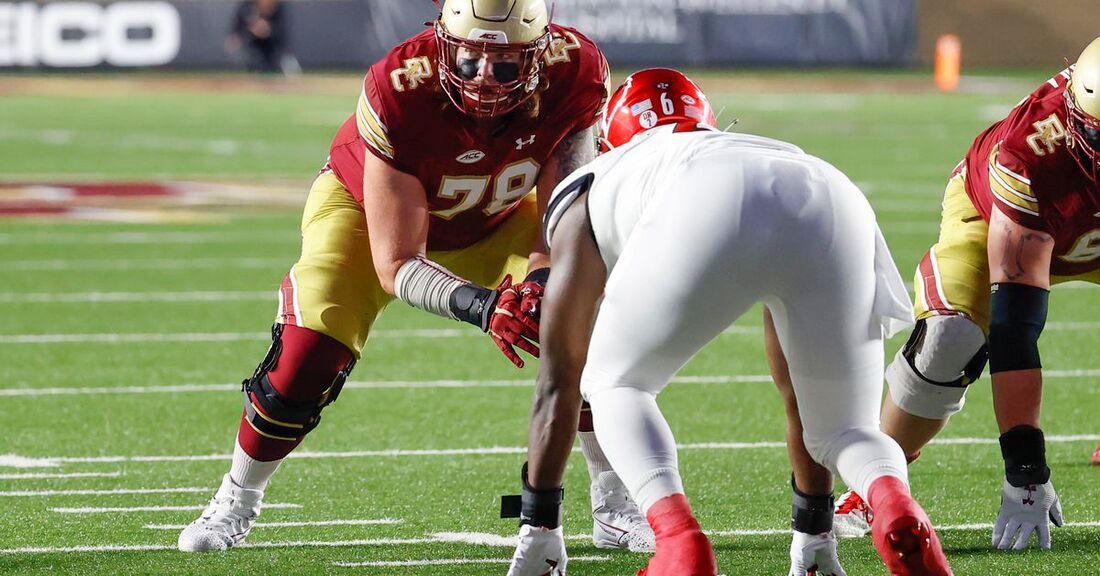 Photo by Fred Kfoury III-Icon Sportswire via Getty Images
Boston College featured one of the best offensive lines in the country and it was very clear to see that the teams productivity and success depended on the offensive line ability to create holes and protect the quarterback and Tyler Vrabel playing left tackle for the Eagles was a key piece of that unit. At 6'5" and 310 lbs., Vrabel brings excellent athleticism, power, and football IQ to the offensive tackle position. He's the son of Tennessee Titans Head Coach Mike Vrabel who was a great NFL player in his own right for the Patriots giving him not just NFL bloodlines but a lifetime of growing up around quality professional football and I couldn't give an answer as to why NFL bloodlines seem to transfer into pro football extremely well at a very high rate but they just do. In pass protection, Vrabel comes out of his stance with good pad level and explosiveness allowing to ensure that edge rushers can't beat him around the edge quickly. For a man his size possesses exceptionally quick feet and good speed for the position which certainly helps him ride edge rushers out of the pocket that try to attack his shoulder and bend the edge. When he lands his punch he can rock defenders and edge rushers on their butts because he puts his whole body plus the kitchen sink when he makes contact. He possesses good footwork when he kicks slides and has the potential to mirror most edge rushers off the line and keep his quarterbacks blindside clear. He's a violent hand fighter at the line who will chop and club arms and hands in order to keep his chest clean. He does a nice job using his opponents speed and momentum against them when they try to bend the edge on him as he's caught some rushers off balance and sent them flying backwards like a Tai-Chi move. He's good at recognizing stunts and twists directed towards his gap inside and has had good success with his athleticism at neutralizing them quickly. He's capable in blitz pick up when linebackers or safeties try to attack his inside or outside gap and light second level defenders up quickly when he gets a shot. The Boston College Eagles are a pro-style running offense and boy does the offensive play caller love running the football off the left side of the offensive line as Tyler Vrabel, and Zion Johnson, can be absolute maulers when blocking both inside and outside. He's explosive off the line with low pad level and excellent leg drive and can be a menace for defensive lineman to deal with. He's very good at turning his opponent out of the hole to quickly open up lanes in the trenches and if need be can turn on the nastiness and drive his defender out of the play completely. He has had instances of collapsing the trenches from the edge allowing huge runs to take place on the outside, check his blocking against Mizzou which saw him dominate in the run game. He's a block finisher when he's driving his man backwards and can plant them into the turf when he can. He's played ample snaps at both right and left tackle and can plug into either position in a pinch for his team, giving him good versatility heading into his NFL career. He's very good at keeping a run play going down field with his ability to make blocks in the second level with his athleticism and his consistency at taking great angles. He is a highly intelligent football player with an excellent competitive fire and a high motor to pair with it.

He's top heavy as an NFL offensive tackle prospect that needs further development in his lower half. He's guilty of lunging over his toes when pass protecting or run blocking and if he doesn't get his man off balance early on when makes contact he can fall victim to getting ripped off quickly. He leaves his chest open too much for comfort on the edge and can find struggling to halt bull rushes when players get into his pads and lock in. His widening of his base can be inconsistent with some instances of him closing it and losing his balance and occasionally falling down and maintaining a wide base will be crucial for his NFL success. His arm length appears average and teams may want to consider him a guard prospect if his arms fall below standard length. He can fall for stutter steps towards his inside gap and has been late when reacting to blitzes in his gap. He's not an overly flexible or bendy offensive tackle prospect and with his somewhat lacking power in his lower half, he possesses a questionable anchor. His punches out of his stance can be outside the numbers on occasion and can mitigate his power. He did play with an potential Day 1 selection in left guard Zion Johnson who helped him keep his inside gap very clean, help him maul defensive lineman with double teams, and rarely need assistance in the middle dealing with his own defensive lineman which is often a tackle, allowing Tyler Vrabel to play on the edge without having to worry about his teammates play.

I've said it for every draft prospect with NFL bloodlines, these prospects come into the program with ties the NFL and more often than not turn into high quality players for NFL teams and of all the players with NFL Bloodlines, Tyler Vrabel's bloodlines are the most enticing with his dad being both a once great NFL player and currently a great NFL head coach. Tyler Vrabel grew in the Patriots locker room during the early dynasty years of the 2000's with Tom Brady, Randy Moss, Vince Wilfork, Richard Seymour, and other great players from those teams and that has a huge effect on a human being when they grow up, not in, but around success like the New England Patriots. He's certainly not a prospect with his flaws like his inconsistencies with keeping his chest clean, keeping his belly behind his toes when blocking, and certainly will need to polish up his technique but this is a player that plays hard and nasty in one of the most brutal positions you can have in the NFL and he'll need to show in workouts that he can learn quickly and develop fast. He's more of a right tackle prospect than blindside blocker with his ability as a run defender but if he shows good refinement in his technique and can shows great improvement as a pass protector I can certainly see a team throwing him at left tackle and letting him take on a teams best pass rusher on an island.