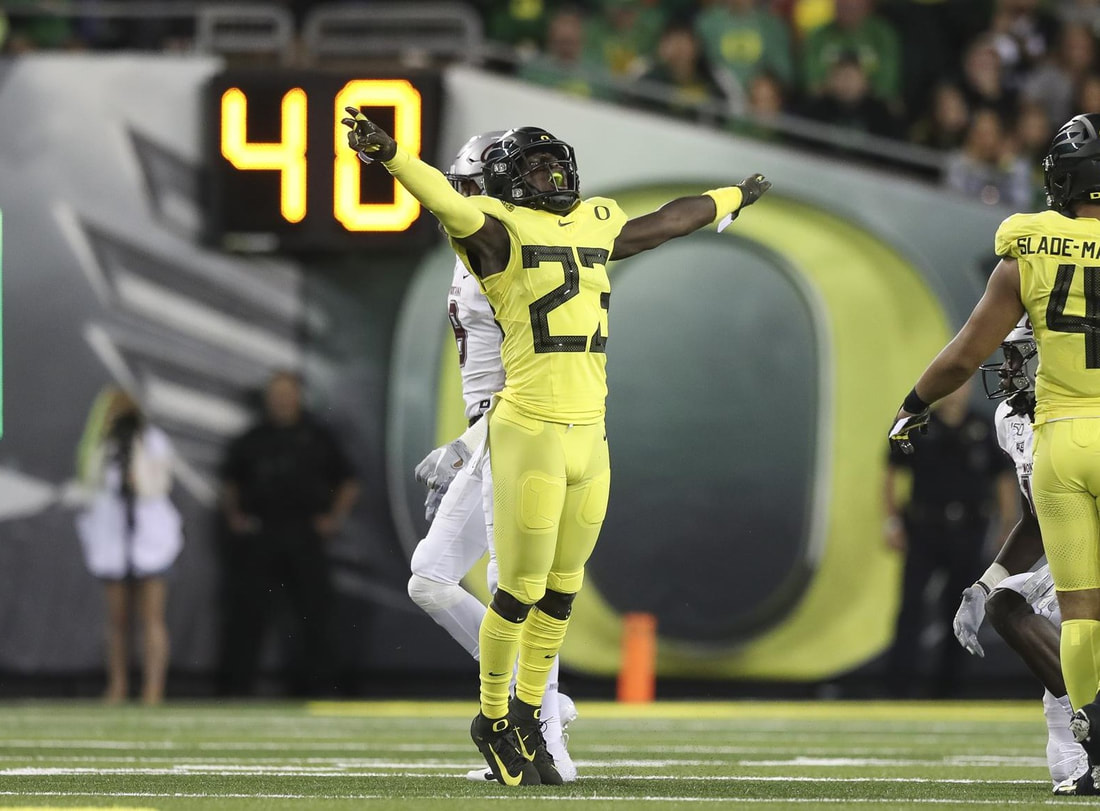 Photo by Eric Evans-Eric Evans Photography
The 2021 Oregon defense has been one of the best in college football with talent all over the unit and Verone McKinley III playing on the back end has been a big reason for Oregon's success. At 5'11" and 195 lbs., Verone McKinley III brings phenomenal athleticism and football IQ to the safety position. He's as pure a free safety as you'll find in the draft with his coverage prowess and excellent instincts. He does a great job of keeping his eyes on the quarterback from the snap till when the ball is thrown and is very reactive when the pass is made. He doesn't get fooled by pump fakes or look-offs and has a great nose for the football. He's extremely versatile for a free safety as he is often used as an outside corner, slot corner, and occasionally a strong safety.
In zone coverage, he plays with great range and bursts on the back end. He has good route recognition at the snap and takes care to limit any false steps in coverage. He has sideline-to-sideline range and has shown the ability to make plays anywhere on the field. He can cover a large area, both on the back end and in-the-box, and possesses excellent burst in his lower half to get to the play quickly. He takes good angles when attacking the pass and does a nice job of disrupting at the catch point. He has excellent quickness and agility and has shown little issues with changing direction and turning on a dime. He has great explosiveness in his lower half and going vertical for football or going from 0-60 has been a non-issue for him. In man coverage, he does a great job staying patient at the beginning of the route and not biting on sluggos or quick hitches. He has a smooth back pedal and keeps his pad level low, allowing to change direction with more explosiveness. He has more than enough quickness and agility to match shifty receivers, whether he's playing outside or in the slot. He has good hip flexibility to turn and run up field if caught on a deep route and has enough speed to keep up. He has outstanding ball skills at free safety with his ability to leap up and snag interceptions at the high point. He has great hands to reel in passes and takes excellent angles on throws to ensure that he not only comes down with the turnover, but also has some room to make a play. He's aggressive on contested catches and will scratch and claw to either come down with the ball or dislodge it. He can hit people when he has a clean shot and can knock footballs onto the turf. He has a clutch gene in him late in games as he's always somehow involved in critical plays for Oregon, checkout his game-ending interception against Ohio State. He's a smart high effort player for Oregon's defense and his play at safety is a huge reason for their success this season.

His biggest flaw by far is tackling ability both in the open field and with backup. He doesn't tackle ball carriers head on and when forced to do, he tackles too high and doesn't bring any momentum behind him. He doesn't wrap up ball carriers consistently and his lack of strength and size often makes it difficult for his bring them down. He didn't blitz very much in college with Oregon simply choosing to rush four down lineman with Kayvon Thibodeaux off the edge and occasionally Noah Sewell.  Although it has minimal effect on his production, having Kayvon Thibodeaux, who'll likely go #1 overall in 2022, rushing off the edge and creating pressure on the quarterback consistently does allow him to take advantage of bad passes and as well as face limited deep passes down field. Although he has dislodged footballs from ball carriers, he doesn't go after the ball enough when making tackles and having that become a more consistent part of his game will help him in his career.

Verone McKinley III would be the perfect player for a team in need of a roaming free safety. His versatility to play corner and range as a safety make him a great pick for a team in need of assurance on the back end. He has the range, instincts, and football IQ to succeed in the NFL and a good combine and workout during the draft process could shoot him up draft boards. If he can fix his tackling issues and develop into more of a blitzer, he could be a quality NFL starter early in his career.