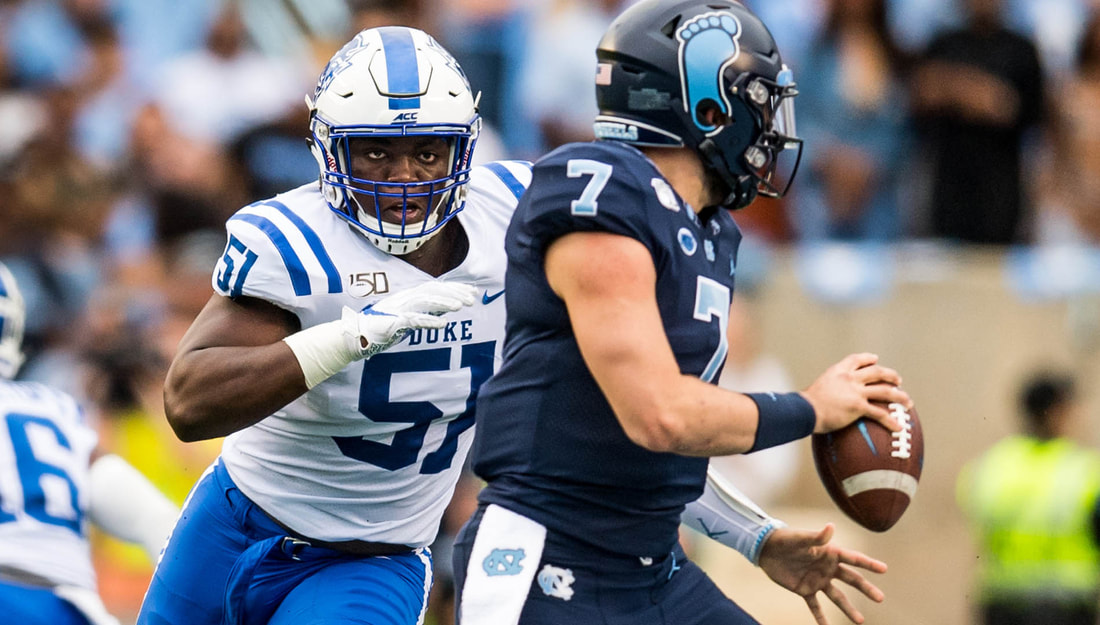 Victor Dimukeje has been a force on the Duke defense for the last two years and has built himself quite a resume in the stat column for NFL scouts. He's rock solid 6'2" and 265 lbs. with ridiculous upper body strength. His frame is absolutely filled out with muscle and has made a living on the field with his bull rush and one-arm stab that has put even the best lineman in his conference on the ground. He comes off the line with excellent burst and plays with an intensity that doesn't quit. He has very strong hands and some of the biggest arms you'll ever find on a 265 lbs. man which helps him drag down ball carriers with ease. He's a very good tackler that rarely finds himself getting dragged. He's been an excellent run defender for the Blue Devils with his powerful upper and lower body allowing him to hold his edge and shed blocks when he has the runner in his sights. He's very active with his hand and does a good job swiping away punches. He has experience playing from both a standup linebacker position and with his hand in the dirt making him a versatile threat on defense. He's been very successful when stunting inside the line and has enough power to drive guards into the pocket. He possesses good pursuit speed and takes great angles when chasing good ball carriers. He's a very high motor and plays through the whistle. He's got some surprising fluidity and flexibility for his size and has on more than one occasion bent the edge on unsuspecting tackles. He goes after the football, usually by upper cutting from the back, and has successfully forced a fumble in each of his seasons. He's steadily gotten better in every year of his college football career which shows the time and effort he puts into the position.

His arms are both his biggest asset and his weakness because while they are massive and powerful, they lack the length to be consistently effective. He constantly finds himself having trouble getting into offensive tackles chest pads as they can effectively ward off his hands. He plays too high when he plays outside linebacker even though he has the leverage advantage in most cases. He doesn't possess counter rush moves in his repertoire and has struggled at times shedding blocks when offensive lineman get a hold of him. While he plays with intensity, I rarely see him lay the wood on runners when he has the chance to.

​His NFL career will probably be at outside linebacker due to his size but he's going to have to develop more of a counter rush game given his lack of arm length. His powerful build is NFL ready and shorter pass rushers on the outside have found success and he certainly fits the build. If he can get set up with a defensive coordinator that can get him to learn some moves, he could be a steal. With his level of work ethic and commitment, he could develop into a quality player down the road.