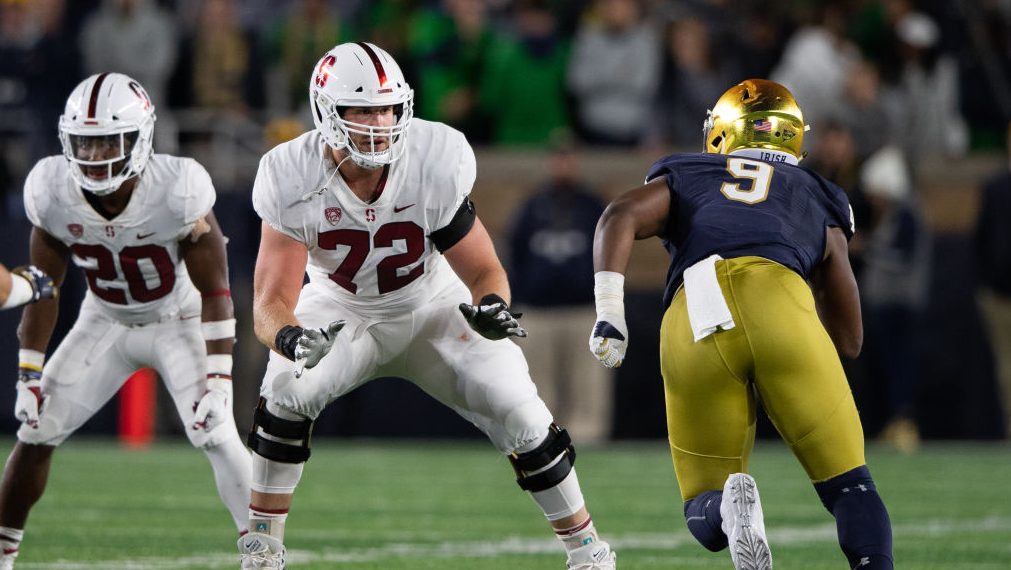 Walker Little has been one of the best offensive tackles in the PAC-12 and one of the more technically sound lineman in the draft. Little is anything but what his name suggests standing at 6'7'' and 315 lbs. with long arms and great athleticism. He's been easily Stanford's best offensive lineman since he stepped onto their practice field and he has been one of the most dominant offensive lineman in the PAC-12. He's anything but his last name would suggest at a massive 6'7" and 315 lbs. with exceptional length and excellent athleticism. He's got long arms as his frame would suggest and he's got plenty of upper body strength to pair with it. He's got excellent lateral quickness to mirror defenders and prevent them from bending the edge on him. Strong hands help him maintain his blocks on bull rushers and are hard to break off once he's latched on. He's as smart as an offensive tackle can be with his ability to not only counter stunts and twists but also has the instincts to know when they're coming. He possesses a good punch and does a great job of timing it well. He's very quick out of his stance and is a very hard player to beat off the snap. Isn't fooled by blitzes off his side of the field and does an excellent job of subduing them. In the running game, he plays with excellent leverage and power and can be a man-mover off the line if he catches his man early. He's very technical in his approach to engaging defenders and has textbook technique when driving his man off the ball or out of the rushing lane and getting to the second level. Rarely overreaches his defender in the second level and does an excellent job of mirroring his defender and pushing them out of the lane. He rarely makes mistakes when choosing who to block in the run game and is capable of leading a convoy on a big running play.

He's got to build his lower body strength more if he wants to be as effective as he can be in the NFL because at times he can find himself struggling to move defensive lineman with lower-centers of gravity and powerful bases. He can suffer from his height at times when dealing with shorter and more powerful defenders as they can more easily get underneath his pads and move him. He can play too tall at times and it can affect his balance when a defender gets into his pads early. He doesn't play with enough nastiness or violence on the field and will need to show he can dominate. He at times can let defenders get into his chest early and it can be hard for him to establish himself. He suffered a season ending injury in 2019 early in the year and it's going to be a big deal for teams to see how he recovers from it in 2020.

He's got everything a team could want in an offensive tackle and will be a great boom-or-bust prospect in 2021. His technique and size give him an incredibly high ceiling but his injury and lack of maliciousness give him a low floor. If he can find his mean streak and his weight room, he'll be a quality offensive tackle in the NFL.