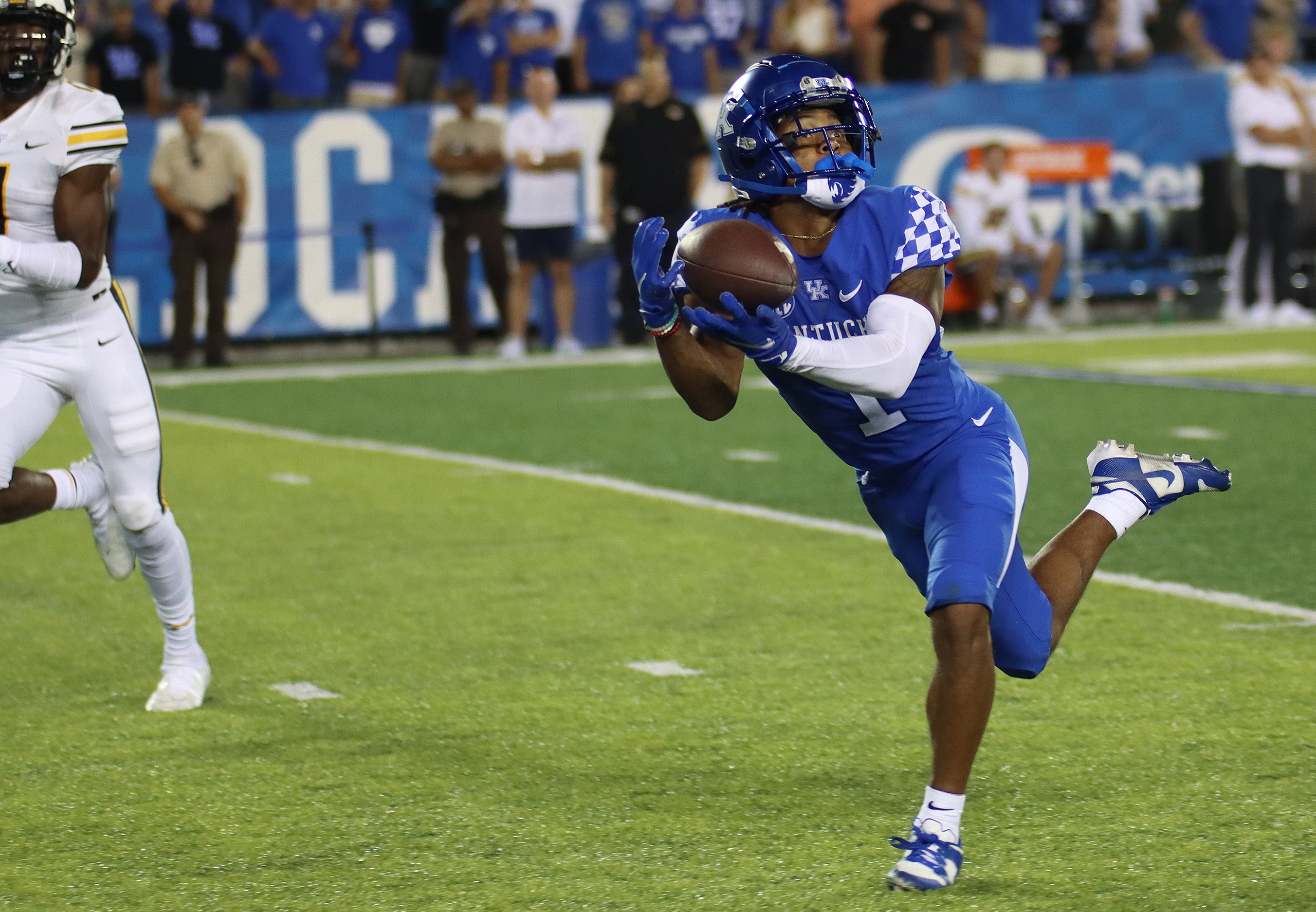 Photo by Jeff Moreland-The Interior Journal
Wan'Dale Robinsons idea of transferring from Nebraska, a school that hardly utilized him in the offense, to Kentucky, a run-based offense that had a huge hole at receiver, was a stellar decision that has earned him the eyes of NFL scouts across the league. At 5'11'' and 185 lbs., Robinson brings elite quickness and agility, play-making ability, and great hands to the receiver position. Wan'Dale Robinson went from a running back recruit to one of the more dangerous receivers in the SEC after transferring from Nebraska who couldn't use him properly to Kentucky who saw his big play ability and made him a fixture in their passing game due to his ability to make magic happen with the ball in his hands. He possesses elite agility, change of direction, and acceleration which helped him turn short receiver screens into big gains. He has exceptional hands for a running back recruit which is partly why he was transferred to the receiver position at Kentucky and despite his size and height Robinson brings exceptional vertical explosiveness to contest catches and strong enough hands to secure the catch in traffic and maintain possession through contact in the air. He has very good speed and if he gets some daylight in front of him he can be a difficult player to catch. He's a hands catcher with the football with very few catches in his body and he's exceptional at securing the football before trying to get up field. When he catches the football, rarely will you see him not make his first and second man miss after the catch because this receiver makes jukes, dodges, and spins from would-be tacklers look almost choreographed and this is one trait of his I know is going to translate at the next level. He's a highly versatile receiver prospect not just because of his previous time at running back but because Kentucky used him in the backfield, in the slot, on reverses, and was a focal point of trick plays. He's a fearless runner with the football whose ability to make defenders miss gave him the greenest of green lights on offense to run all over the football field in an effort to pick up yards after contact. I do love that he made his bones this season in the SEC against some of the best defenders in college football and his production in the toughest conference in college shows that at least some of his skills will translate. His production in his one year at Kentucky is also impressive when you consider that Kentucky is a run-based offense that only passes out of necessity.

His slight frame relegates him to a slot receiver role in the NFL and I wouldn't try to make him an option on the outside. He struggles to release from press and man coverage when playing against bigger corners and may need to be schemed open early in his NFL career. His catch radius is nothing special and will need throws to be somewhat accurate for him to come down with them. His big ability as a receiver could be a gift and a curse in the NFL as his slight frame and the ruggedness of the NFL could equal a short NFL career. His big year for Kentucky is his only one in his career and it does bring up the question of if he can repeat his performance at the NFL level. He's a work and progress as a route-runner given his recruitment, and usage, out of high school was a running back and Nebraska never could figure out how to utilize him as such and asking him to be an outside option for an offense will be a tall task early for him. More Tavon Austin as an offensive weapon rather than a Deebo Samuel coming out of college because while he's had a chance to do everything he has yet to show that he's a master at one thing and he could end up being more of a gadget player rather than an actual offensive weapon.

I think Wan'Dale Robinson is more of a project than a finished product due to his relative inexperience at the position but he has all of the tools to become a high quality slot receiver and maybe one day an outside option. Robinson's propensity to make the best college football defenders miss with ease is what is going to get scouts excited about his potential in a pro uniform. He'll need a great combine and excellent workouts with teams to shoot his draft stock up and if he accomplishes this, he's likely to be off the board early in Day 2. In the right situation, Robinson could be a dangerous slot receiver early in his career and could be a potential outside receiver down the line.