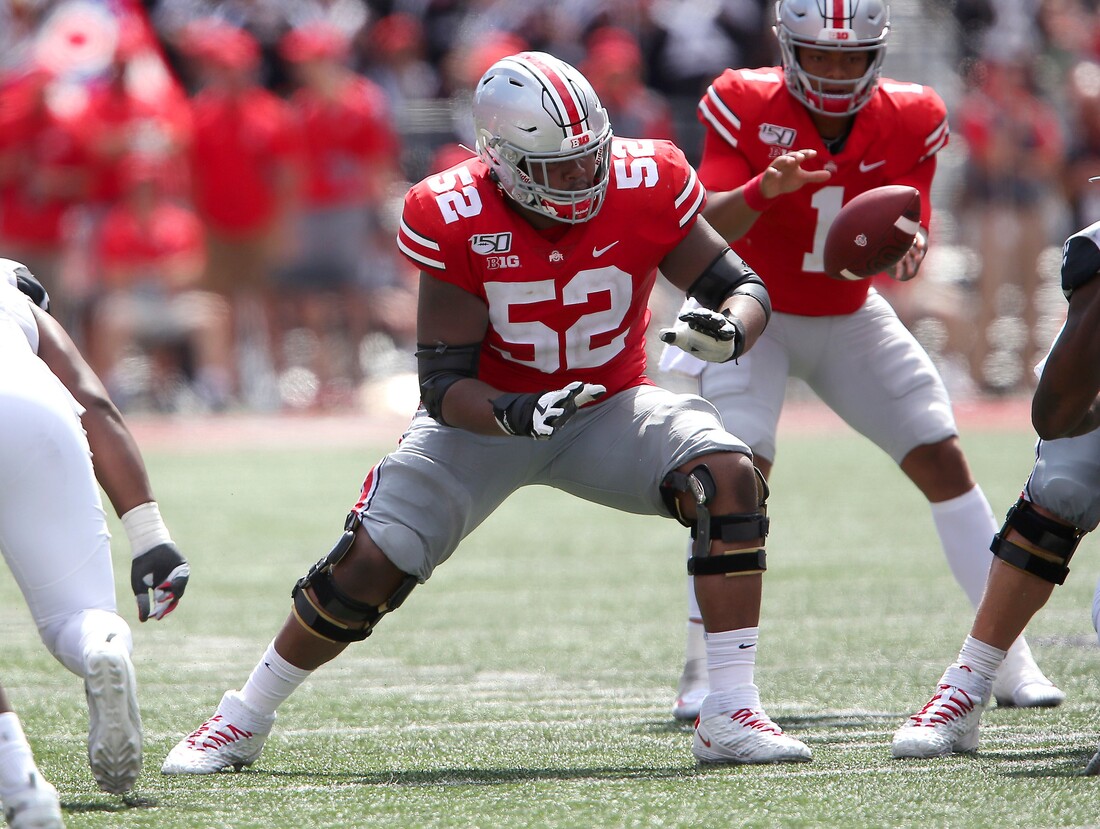 Ohio State is poised for a very big year in 2020 with a good portion of the talent on the squad returning and Wyatt Davis is one of their best players who could see himself climb up draft boards if he has another stellar year. He's got the perfect size for an NFL guard at 6'4" and 310 lbs. with elite level athleticism and rich NFL bloodlines, grandfather is Hall of Famer Willie Davis. He's plays guard like a great NFL guard should, ruthless and nasty. He's the last guy on the Ohio State offensive line you want to face when he starts pulling and creating a lane because he will light up defenders. He has exceptional upper body strength and one of the most effective punches in the draft. He has very quick feet and lots speed to reach the second level and pummel linebackers or lead a convoy for the running back and break open a hole. He does a great job of turning his man out of the hole and giving daylight to his running back. He's at his best in the second level of a defense where his athletic ability and speed make quick work of linebackers and safeties. He opened up a lot of holes for the Ohio State running backs when they ran to his side which shows the trust the team has in his ability to consistently beat his man when called upon. He possesses very strong hands and is a hard player to break away from when he sinks his claws into his opponents chest. In pass protection he has been an amazing asset for quarterback Justin Fields as rarely does his opponent ever break away or elude him in the interior of the line. His footwork and agility for an interior lineman are second to none in this draft and it helps him not only mirror defensive lineman but also quickly and effectively help with double teams. He can plant his legs in the ground in pass protection and make bull rushes by defensive lineman very difficult. He's very flexible as well which helps him swallow bulls rushes and reestablish his base quickly.

Too often he's man handling defensive tackles out of his stance and then the next play is getting walked backwards by the very same player. His arm length is short which can cost him big when playing against lengthy defensive tackles. He can be a little to aggressive at times in both the running and passing game as he look for the kill shot rather than neutralizing his guy. He has a history of missing blitzers as they blitz his side of the line and if his quarterback in Justin Fields wasn't so athletic, he would have a lot more sacks coming from his gap. Suffered a concerning injury in the championship game and teams will need to monitor the it.

Wyatt Davis turned heads last season for his menacing style of play and his exceptional athleticism but his mental relapses will have to get fixed if he wants to see himself get drafted early. Wyatt Davis projects to have a quality career in the NFL and shoud see action on Day 1 of the 2021 season.