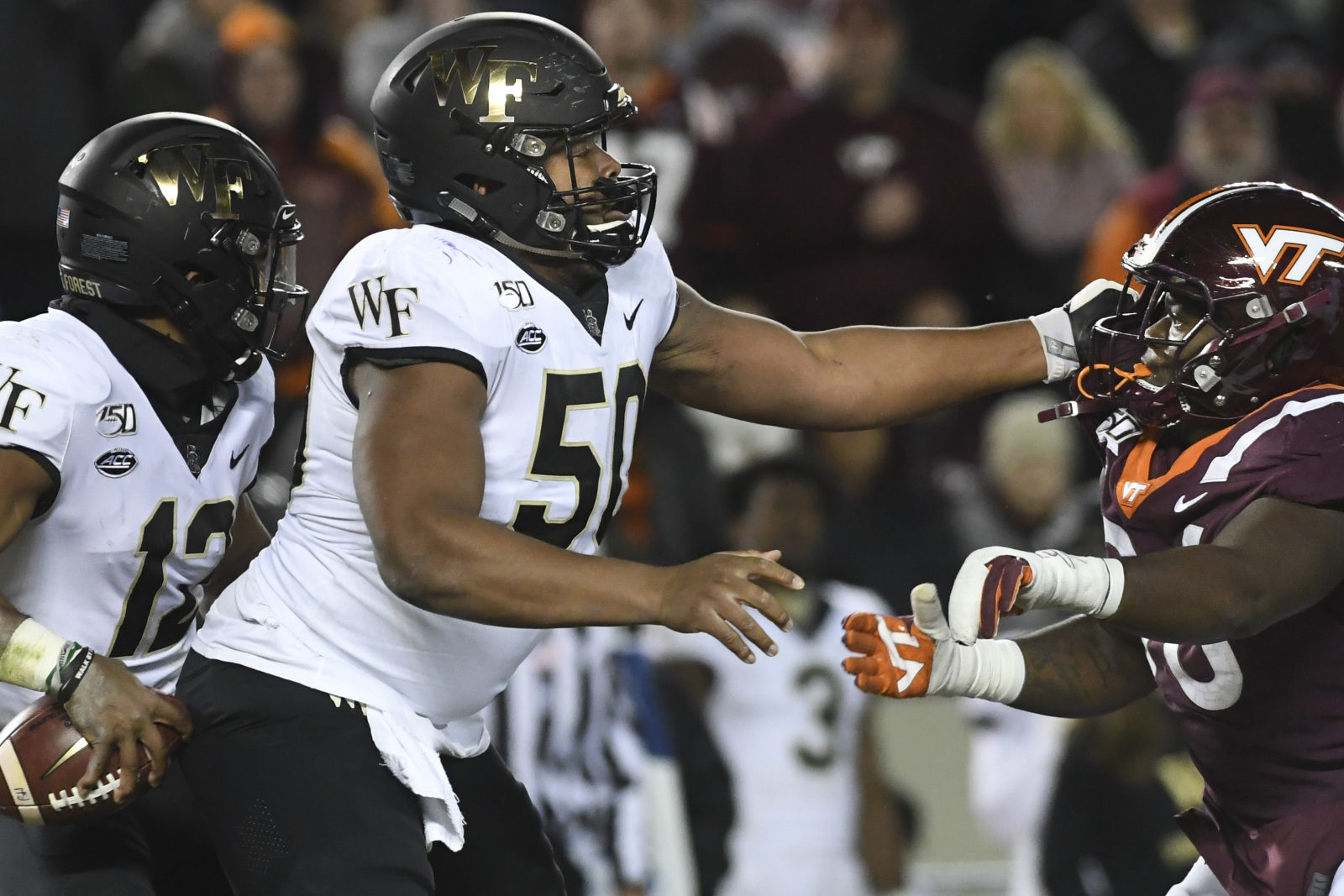 Photo by Michael Shroyer-Getty Images
If you haven't heard of Zach Tom as a potential Day 2 center draft pick I don't blame but after a very good combine performance and more scouting into his game tape you'll find yourself in awe of what this prospect has done in his Wake Forest career and should be considered the number center prospect in the draft. At 6'4" and 304 lbs., Tom brings tremendous size, length, and versatility to the center position. Zach Tom was one of the more athletic interior lineman in the draft and he certainly put his name on the map for teams looking to improve at the center position. When you watch his tape, whether at tackle or center, you can see the speed and agility that made him a  difficult player to beat off the snap. As a center prospect, he plays very fast in the pass game, quickly shooting up out of his stance and keeping his fett chopping to ensure that he can make quick adjustments when it comes to neutralizing blitzers as well as ensuring that shifty defensive lineman can't slip by him. He plays with excellent pad level out of his stance and rarely finds himself getting overwhelmed off the snap. He has exceptional flexibility in his frame from his days at tackle to absorb contact and reestablish his feet without being run over and his ability to be flexible in his base allowed him to overcome his deficiencies with power. He's very accurate with his punches and when he lands he brings enough power to at least stun his opponent. He's very effective at assisting with double-teams and does a nice job of disengaging from double-teams to keep the interior clean. As a run blocker, he comes off the line with excellent explosion to either get the necessary angle to drive his defender out of the way or reach the 2nd level to create lanes. He's very good at recognizing the most immediate threats to play when having to make choices when blocking and has more than enough athleticism to out angle s and block shiftier linebackers and safeties. He's a technical savant as an offensive lineman that knows how to use angles and leverage to win battles over athleticism and power and his technical prowess allowed him to be such a versatile offensive lineman. He's logged in quite a few snaps in his career and has experience at every single position along the line and if you need an offensive that can be plug and play when one of your players goes down Zach Tom should be at the top of your list. He's one of the smartest players in the draft both on the field and off the field. He's very capable of reading defenses as he did for Wake Forest and has shown that he prepares very well for each game. He's proven to be a true team player with his versatility and willingness to learn new positions and his ability to quickly learn each position shows his level of development.

Zach Tom has about average power in his base and although proved himself on the edge with mitigating bull rushes, halting defensive tackles in the NFL will be a different animal entirely and I worry that the transition into the NFL when blocking interior lineman could be a tough one. His upper body is somewhat lacking in power as well which can be seen in his punch and his ability to stifle lineman coming off the snap and hitting the weight to build up his power will be crucial to his success. In the run game, he can struggle with finishing blocks and too often simply tries to ride his man out of the play. Could be a nastier blocker when getting into his NFL career and developing a mean streak will certainly. He's been so versatile in his career that there is a small chance in my opinion that he doesn't truly have a niche in the NFL, although this is purely hypothetical.

Zach Tom showed me enough on film, at the combine, and in his career at Wake Forest to warrant a potential top 100 selection and teams shouldn't judge him based on just his combine performance, even though it was impressive. His tape is good and his off the field activities show a hard working and determined individual. He projects as a core offensive lineman with his versatility but I certainly can see him being a starting center in the NFL.