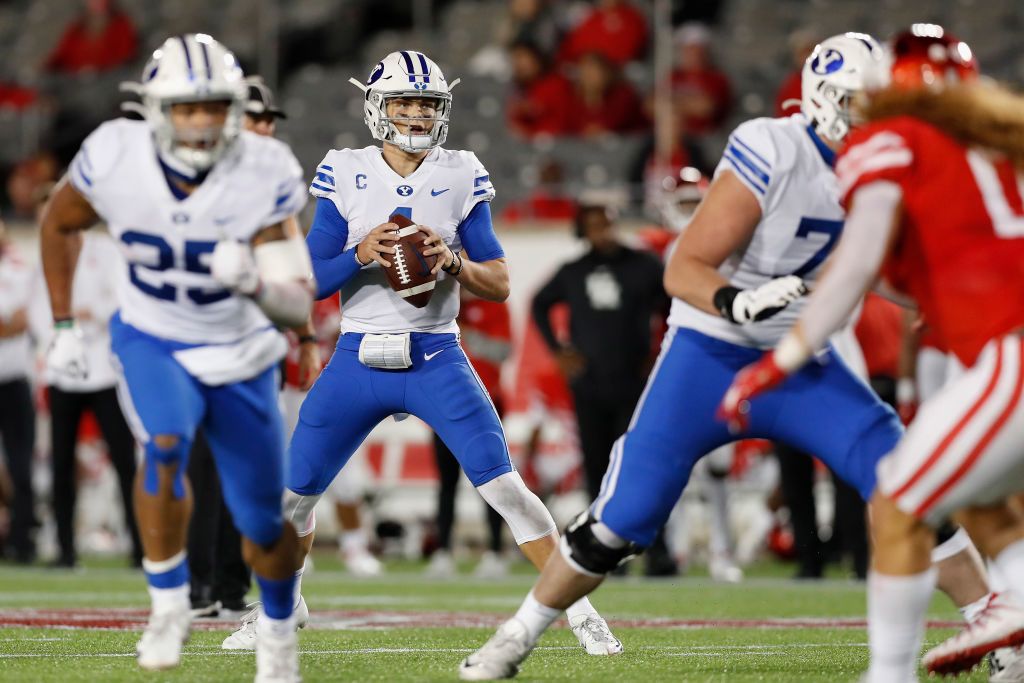 Zach Wilson has been easily one of the most talked about and hyped quarterbacks in college football and even has some scouts and teams thinking about drafting ​him in the Top 5. Zach Wilson features a slight but athletic build at 6'3" and 210 lbs. with good speed and accuracy. He's been easily one of the most accurate quarterbacks in college football, especially wit his deep ball which has been almost impossible to defend. He clearly possesses an excellent football IQ and has quite the command over the Cougars on the field, directing hos weapons and making sure everyone's on the same page. He does a good job of hitting his receivers in stride and is consistent with his throws. He possesses great mechanics and a quick ball release that allows him to avoid getting sacked by defenders. He has the precision and accuracy to hit all levels of the field and does a great job of throwing to where only He's very good out of the pocket and can be a dangerous runner if he has some daylight to run towards. He's been very successful in 2020 despite losing his best offensive weapon in tight end Matt Bushman. He's a great scrambler when the play breaks down and can accurately throw the football when running outside the pocket. He clearly shows good decision making on tape with his ability recognize coverage's as they develop can shred defenses. He has played in a pro-style offense in college football which has made transitions into the NFL easier for young quarterbacks. He's an extremely competitive player who will take calculated risks in games to keep his team in the game as well as run up the score.

One of the big issues with him throughout the draft process will be his size which is below average at best for a quarterback and him taking shots from NFL defenders could severely shorten his NFL career. He has had injuries to his shoulder in the past which also doesn't help his durability questions in the NFL and any team that drafts him should immediately invest in an offensive line. He doesn't possess a great arm nor does he deliver the ball with much velocity or speed and while he has so far avoided interceptions in college with his accuracy, NFL defenders will likely take advantage of his floating passes. He played at BYU whose only real competition each year is Boise State which shows that he hasn't played against top level defenses so far in his career.

Zach Wilson is going to enter the draft process in 2021 and scouts and analysts are going to hype him all the way from January till April due to his on-field performance and off-field likability. His competitive nature, poise, and consistent dominance in 2020 made him a household name to teams and fans in need of a franchise quarterback. And while his put up a great many highlights of pin point throws, his intangibles and overall quarterback build will worry if I am a general manager unless he puts on some weight. He's going to be a great quarterback if given time to develop and talent put around him and any team in need of quarterback should have him high on their list.