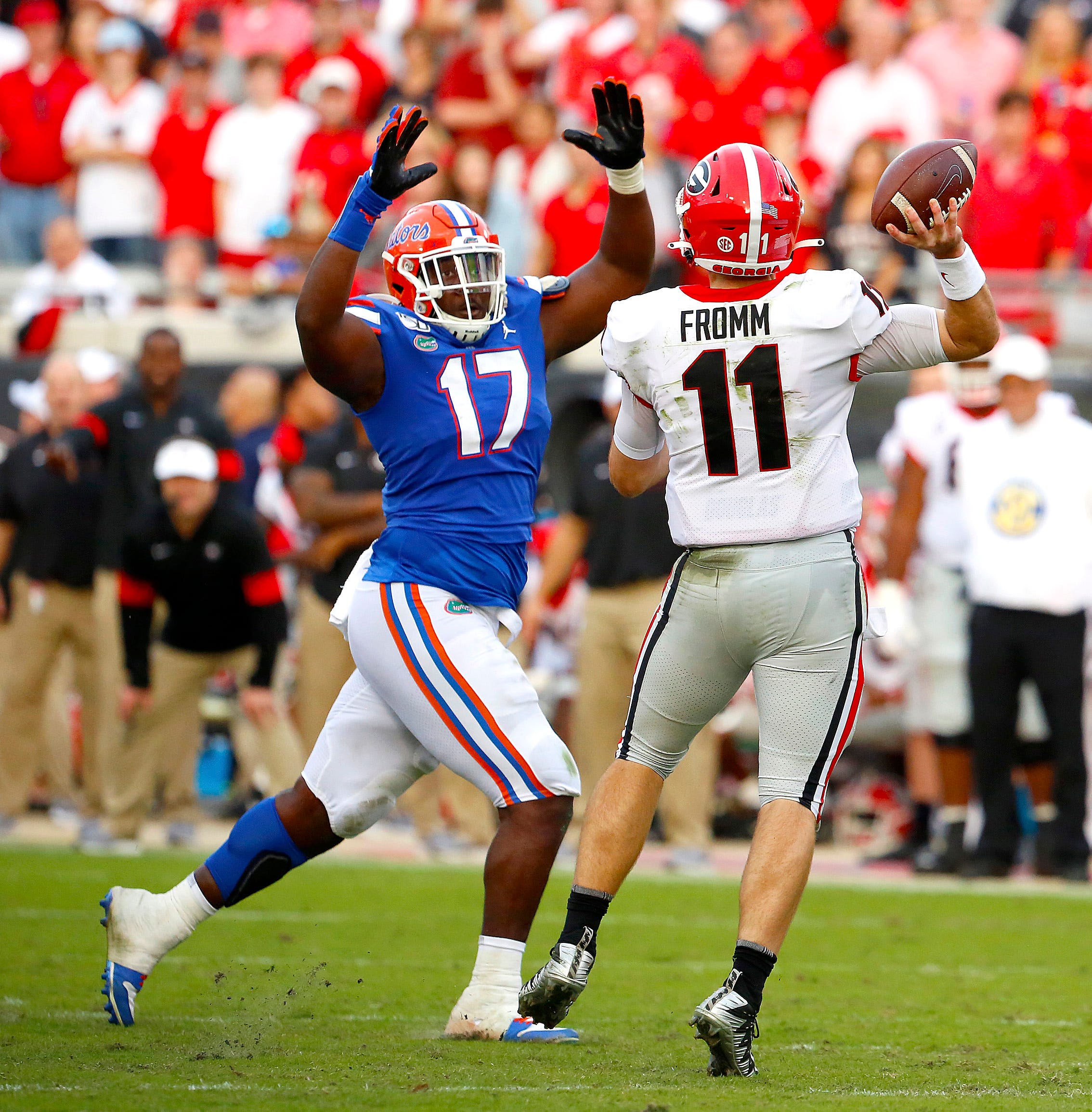 Photo by Brad McClenny-Gainesville Sun
The Florida Gators had an up-n-down season in 2021 but Zachary Carter was a very bright spot on their defense after his breakout year. At 6'4" and 290 lbs., Carter brings excellent power and athleticism to the defensive line. He has a phenomenal first step off the line and brings great momentum to the point of contact. He does a nice job of keeping his pad level low when coming off the line and does a nice job getting into his opponents chest quickly. He has great arm length and tremendous power in his upper body which has helped him become much more of a gap penetrating force in the middle of line. He possesses a extremely powerful punch off the line that can upend his opponent and drive them back into the pocket. He has great speed for his size and has shown the ability to chase down quarterbacks and running backs if he has the angle in the backfield. He’s an excellent bull rusher, both inside and outside, and does a great job of driving offensive linemen back into the pocket and forcing the quarterback to scramble outside. He has a very powerful one-arm stab when trying to bend the edge and his impressive arm length helps keep offensive tackles out of his chest. He has a good rip move on the edge that helps him shorten the distance to get to the quarterback. He has a quick stutter-swipe move on the inside and can squeeze by guards and centers in the interior of the line. He has a powerful push-pull move that has proven to be very effective when shedding blocks on the outside. He has a decent counter spin move when his initial rush move fails. He will attempt to block passing lanes with his arms if he can’t get home. In run defense, he does a great job of shed blocks quickly and chasing ball carriers. His positional and scheme versatility makes him an excellent run defender. When asked to play on the edge in run defense, does a nice job of holding his ground. He does a great job of bull rushing into rushing lanes, often forcing running backs to bounce runs out of the hole. He’s a phenomenal gap shooter in the line and can wreak havoc early for offenses if left unchecked. He’s a great tackler and big hitter if he has a clean shot on ball carriers. He does a nice job of trying to strip the football from ball carriers and has had some success at causing turnovers. His versatility is his best attribute heading into the draft as he has had to wear a lot of hats for the Gator defense. He’s a lunch-pail player who is willing to do whatever is asked of him with 110% and is a fiery competitor on the field.

He’s very raw in his technique as a pass rusher especially with his pass rush moves that involve finesse. He doesn’t have any moves in his arsenal that utilize his speed and agility as a pass rusher and it makes him somewhat of a one-dimensional player. He doesn’t have the necessary flexibility in his frame to effectively bend the edge and get to the quarterback. He doesn’t have a swim move in his arsenal which is odd considering his arm length and size would be perfect to make that move effective. He has a “tweener” label attached to him coming out of the draft because he’s too big to play edge rusher and too small to play inside, however I think his future is in the middle of the defensive line. He possesses only average lateral quickness and agility and has issues with changing direction, especially in run defense when the play gets by him. He can get caught in the wash of the offensive line and find himself getting driven out of the play. Although he has mightily improved his ability to withstand double teams and power blockers, he has issues with his gap in run defense when in the middle of the defensive line and can often be completely driven out of the play.

Zachary Carter is a late-bloomer in the 2022 NFL draft but his potential to be a gap penetrating 3-tech or a 3-4 defensive end in the NFL is very high. Carter has slowly but surely refined and polished his craft throughout his college career and it all came together in his senior season. He has a high ceiling as a prospect but a low floor if asked to play on the edge and rush the passer with his lack of flexibility. If he continues to refine his technique, footwork, and gain some more muscle mass a team could have a quality starter on their roster.