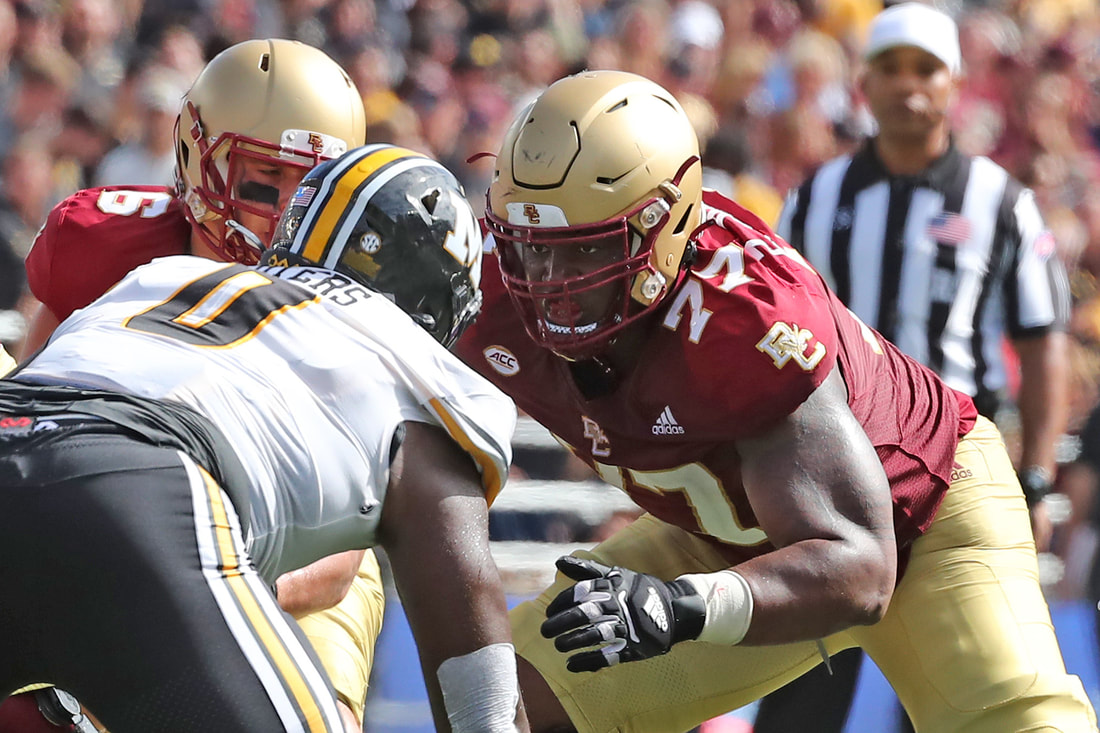 Photo by John Quackenbos -Boston College Athletics
Zion Johnson has been one of the best transfers Boston College has had in a very long time and will take his talents to the NFL come April 2022. He possesses a very muscular build for an interior offensive lineman at 6'3" and 320 lbs. with excellent athleticism and a powerful frame. He possesses a Tyron Smith level athletic build for an offensive lineman and he's going to shock a lot of NFL defensive lineman with his power due to his small stature and very compact build. He went from a 0-star recruit at a Division II school in Davidson to becoming one of the best stories of hard work and perseverance in the draft which shows his level of effort, commitment, and dedication to the game of football which is going to really go well in interviews. In pass protection, he's very quick off the line and his excellent footwork helps establish a powerful base as soon as he kicks back. He's very good at keeping his chest clean from defenders and has good arm length for his size to maintain distance from defensive lineman. He brings excellent power in his punch at first contact and does a nice job of establishing his anchor afterwards if he's getting bull rushed. He's a violent hand fighter with powerful chops and nasty play in the trenches which allowed him to take control of defensive lineman early and often throughout his career for the Eagles. He has a very powerful punch that he uses with accuracy and precision and does well at absorbing defensive lineman's punches as well and maintaining his base. He has surprising flexibility in his hips and does a great job of anchoring his base and halting bull rushing lineman from collapsing the pocket. He does a nice job of keeping his eyes on his fellow lineman to the left and right of him and is very good at assisting on double teams to keep the pocket from collapsing. He played left tackle for considerable time in 2021 after Tyler Vrabel went down with an injury and showed phenomenal positional versatility and a very high football IQ considering that he never played the position in college, although his position in the NFL should be a guard with the added option as tackle depth. His time at left tackle showed his ability in pass protection as well as with his exceptional lateral agility and technique against edge rushers who are more lengthy and faster than he is and he proved himself to be better than most tackles in the draft. Boston College runs a zone-run based offense that many NFL teams have adopted in recent years and Zion Johnson is at his best when he can run block and blast open holes on the defense. He comes off the line with phenomenal pad level and momentum and on a regular basis for Boston College took his opponent across from him and plowed him out of the way. He brings excellent power at the point of contact and often can upend his opponent. He does a great job of turning them out of the run lane allowing his running back to hit the hole cleanly. He has big hands that can be vice grips when locked onto chest pads and is very difficult to break away from when he’s latched on. He run blocks with a violent demeanor and has been in some nasty battles in the trenches when playing against top defensive line talent. He’s a mauler and finisher at the end of blocks and looks to plant his man into the dirt on every block. He’s a force as a pulling guard with his athleticism and power and was Boston College’s point man on many break away outside runs. He can get to the second level with ease and has more than enough athleticism to make quick work of linebackers and defensive backs trying to get around him. He’s a high motor and high effort player that has shown that he gives his all to the game of football, both on and off the field, and should be on all 32 teams radar come draft day.

He can be guilty of lunging in pass protection and can have issues reestablishing his base when he gets caught. He plays with two other good lineman prospects in Tyler Vrabel and Alec Lindstrom and while he certainly sets himself apart, having those two players there help mask his deficiencies. He has issues dealing with defensive lineman that can outreach him in the trenches and can struggle against 1-techs that can win the leverage battle at the line. Countering stunts and twists as well as blitz pick up is still developing, although it's much more improved from 2020 tape, and he will need good coaching to clean up this area of his game.

Zion Johnson's story of hard work and determination is what sports is all about and I think he’s going to take the draft world by storm once he starts working out for teams and testing at the combine as more people get to know him. Throughout his football career you can see a player that adapts to the level of play around him and has shown an ability to surpass it and while the NFL is a different level of football, his ability to develop and acclimate quickly will be crucial for his success in the pros. I think he possesses one of the higher floors in the draft with his combination of technique and athletic ability and he’ll be a plug-n-play guard Week 1 of the NFL season. He’s at the very least a quality starting NFL guard with pro bowl potential.