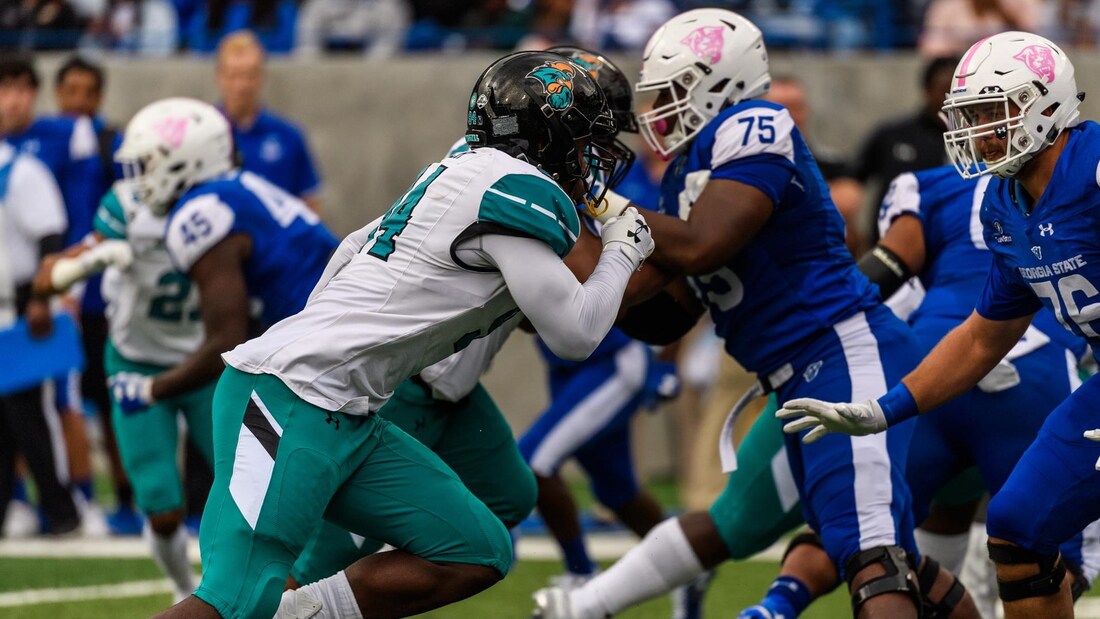 Photo by Danny Karnik-goccusports.com
Coastal Carolina's Jeffrey Gunter has quietly been one of the most productive pass rushers in college football and if he weren’t playing for the Chanticleers but rather a Power 5 school, he’d be much higher on draft boards. Jeffrey Gunter brings prototypical size at 6’4” and 260 lbs. with impressive power and great length. He has a great first step off the line that both gets him a jump past the offensive tackle if he’s not quick enough and helps him get the upper hand early when making contact. He also has a great push-pull move move that’s made even more effective by his power in his arms and chest. He has good agility for his size and can be trusted to stunt inside and collapse the pocket from within. He has a good swim move on the inside that can be effective if he times his cuts properly. He possesses one of the best bull rushes you can find in college football as he simply can upend offensive tackles and drive them back into the pocket. He plays with excellent pad level, and does so with consistency, which helps his bull rush continue to be potent throughout the game. He does a nice job of using his length to keep his chest clean from offensive tackles and his violent hands help deter lineman from engaging him. He has a decent counter spin move when his initial rush fails and it does help him rush the inside gap if the guard doesn’t protect it. He has a malicious club and swipe move when attacking the outside shoulder of the offensive tackle. He’s one of the best edge rushers in college football at punching out or stripping the football from ball carriers due to his heavy hands and powerful arms. In run defense, his power becomes his best tool as he does a good job of digging his heels in the dirt and holding his edge. He has a large tackle radius with his length and great grip strength and making tackles outside his frame hasn’t shown to be a struggle for him. He’s one of the most aggressive tacklers in the draft and will pick up and slam ball carriers if they fight for yards. He’s a very versatile edge rusher with adequate snaps in a two-point, three-point, and four-point stance and has great scheme flexibility. He plays with a phenomenal motor and a great deal of emotion and has shown himself to be a leader of not just the Chanticleer defense but of the team as well.

His biggest issue heading into the draft is his lack of speed on the edge and it shows up in all aspects of his game. When he explodes off the line of scrimmage he rarely finds himself beating the offensive tackle around the edge and constantly has to fight through blocks to get home on his rush. While you can see that he gives 110% effort when chasing ball carriers he doesn’t have the speed to run down anybody, even if he has good angles on his man. His pass rush arsenal is still developing as he has tried to broaden repertoire and you can tell he has a ways to go before he uses his moves with consistency. While has good agility, his ability to stop and change direction has proven to be a struggle for him. He doesn’t appear to have great flexibility in his frame when bending the edge. He plays with an edge to him and has gotten trouble occasionally by letting his emotions get the best of him, just ask 2020 #2 overall pick Zack Wilson when he played Coastal Carolina.

Jeffrey Gunter has a great story and has game tape that shows a player who gives his heart and soul to the game of football and while he certainly has a ways to go to be a complete player in the NFL, guys with his level of commitment to the sport usually find a home somewhere. If he can polish his pass rush technique more and hit the track and field to get faster, he could be a good starter in the NFL.