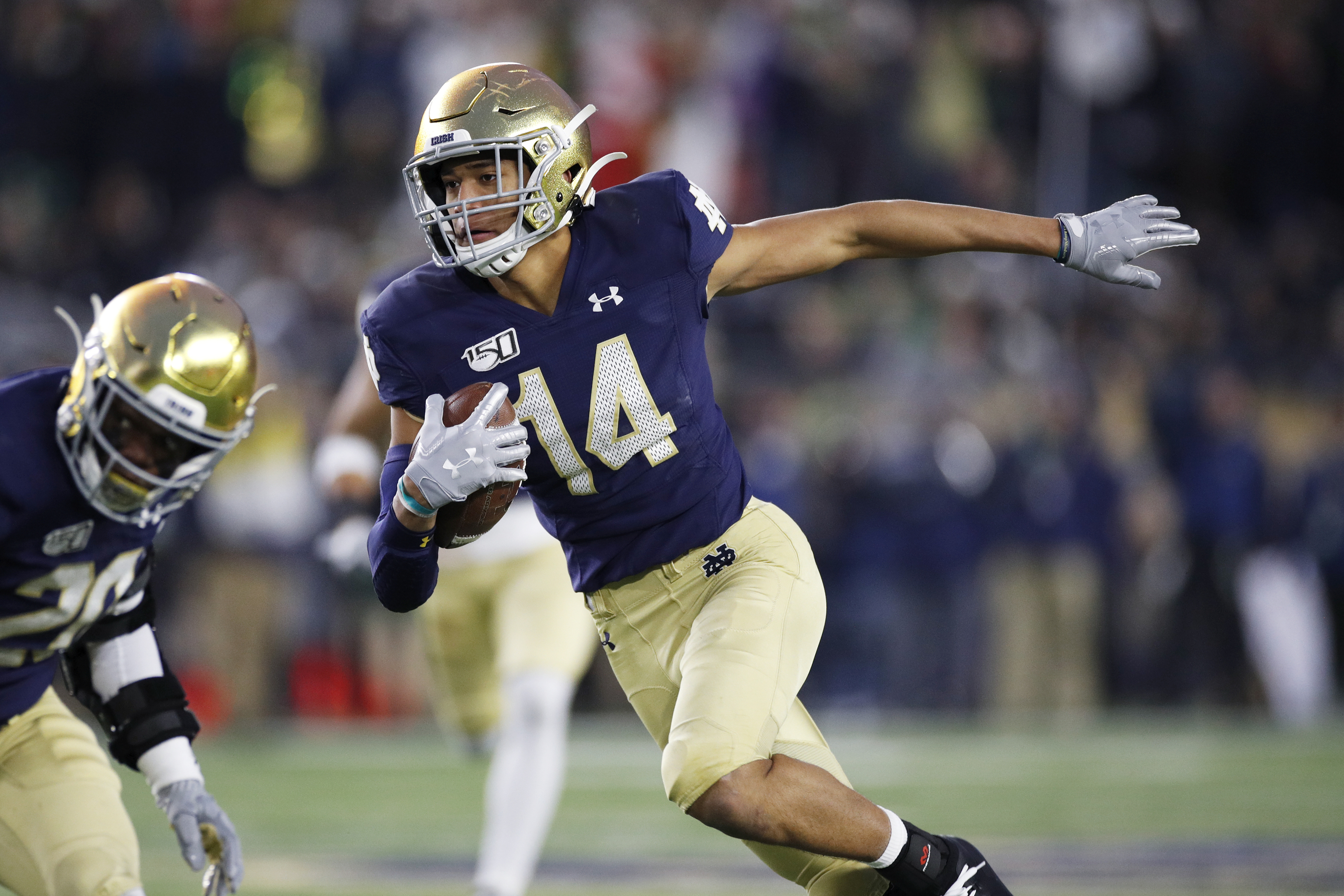 If you could describe Kyle Hamilton in one word it would be “Unicorn” because there has never been a safety prospect with his blend of size, athleticism, and technique in recent, or possibly ever. At 6’4” and 220 lbs. Safety Kyle Hamilton brings mythical size to the safety position and his astounding build helps him tremendously on the field. He has outrageous range in the back end of the defense and when he’s patrolling deep, college quarterbacks avoid throwing deep. His back pedal is technically sound and his hips are very smooth when turning and running to the ball.  He’s an exceptionally fluid athlete with excellent balance and flexibility in his frame to make difficult tackles and make acrobatic plays. He has a very good change of direction to keep up with smaller shiftire receivers and excellent make-up speed in case he has to regain ground on a play.. He’s a ball hawk in its purest form with a litany of interceptions that few can make. He has tremendous hands and is excellent at high point passes, especially with his height. His build makes him a nightmare on jump balls where his height and hops allow him to contest passes or come away with the football. He can blanket tight ends all day long and his exceptional hops make him a difficult player to throw over. He’s a cerebral assassin when it comes to football IQ and nothing seems to phase him on the field when it comes to diagnosing plays quickly, anticipating routes, and jumping throws. He’s as versatile as a Swiss Army knife in the secondary with his ability to play safety, slot corner, outside corner, cover tight ends, and play in the box in run support. He has plenty of experience playing man coverage, especially against tight ends and can be trusted to shadow corners that are playing against the elite receivers. He’s at his absolute best in zone coverage where his height, range, explosion, and astronomical football IQ all come together and make him a nightmare for quarterbacks and offensive quarterbacks to play against. Because he’s such a savant in coverage his ability to defend the run is overlooked because by no means is he afraid to stick his nose into the trenches. He’s a phenomenal blitzer for a safety where his fluidity, flexibility, and explosion make him a terror for lineman and running backs to get a clean shot on him. He has ridiculous arm length, even at 6’4”, to go along with strong hands which allows him to make difficult tackles. He can be a missile when he has a clean shot on ball carriers and he’s tough as nails when making contact with ball carriers. He plays in the SEC and has absolutely feasted against some of the best passing attacks in college football. He's a veracious competitor and a high motor player that leaves his heart and soul on the field every game and can be trusted to give 100% on and off the field.

Kyle Hamilton, despite his Unicorn traits, still has aspects of his game that need improvement. His build, while at 6’4” and 220 lbs., is lankier and thinner than some scouts would like. He can too often look for the big hit on tackles rather than wrap up and bring down ball carriers which will backfire quickly in the pros with some powerful  running backs in today's game. When asked to blitz, he can be overzealous to make a play in the backfield and can lose sight of the ball occasionally by biting on play action and read option plays. Although press coverage isn’t a normal part of a safeties game, he has the frame and athleticism to press tight ends at the line and make life hell for them and learning sharpening his press coverage skills will go a long way in the pros. If there is one actual problem with his game as a safety, it’s that when he makes tackles or engages ball carriers he never seems to go after the football and has issues trying to strip balls from players likely due to his lanky frame.

Kyle Hamilton has very few holes in his game and everything that he’s exceptional at skill wise usually translates very well into the pros. He’ll be the talk of the draft process as scouts, coaches, and front office exec’s will be in awe of his ability at the combine and in private workouts. The highest drafted safety over the lasted 30 years was the late-great Sean Taylor at #5 in the 2004 draft and I wouldn’t be shocked to see Kyle Hamilton get selected before that pick.