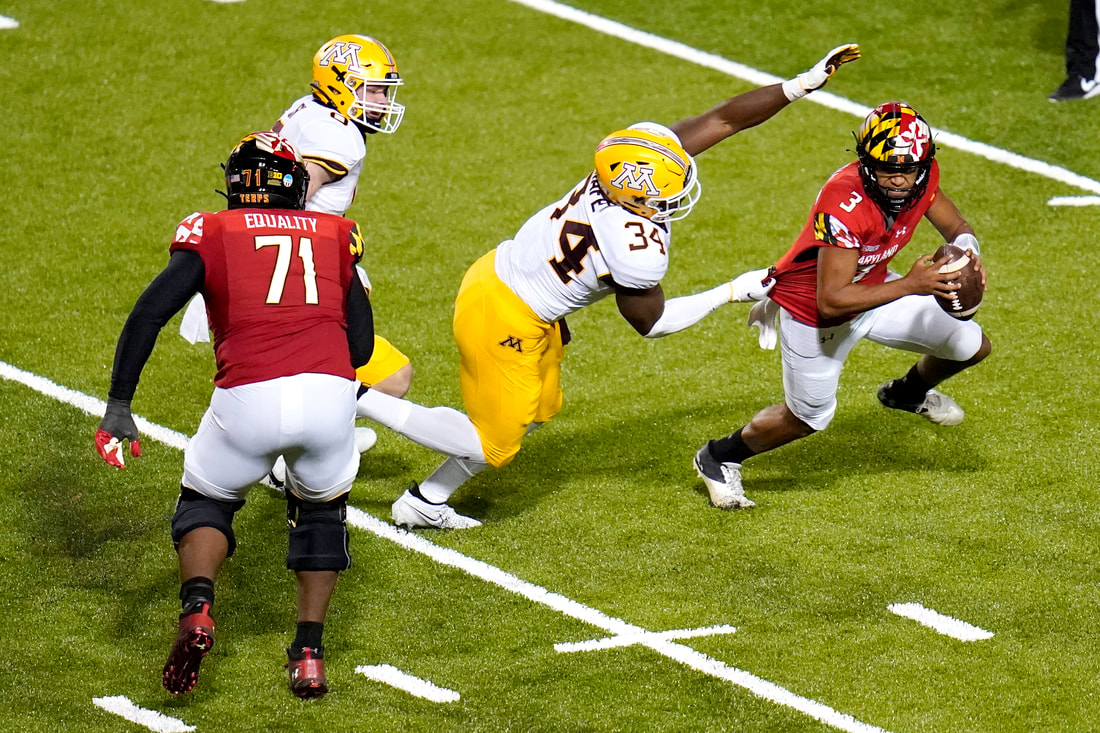 Photo by Julio Cortez-Associated Press
No pass rusher in college football had a hotter start to their 2021 season than Boye Mafe and he certainly has earned the eyes of NFL scouts for the upcoming draft. At 6’4” and 265 lbs., Mafe brings great size with long arms and excellent power. He has phenomenal arm length as an edge rusher and consistently utilizes his length to its full potential.  He has great agility and quickness for his size and has good flexibility in his frame. He has good explosiveness out of his stance and makes an impact when he makes contact. He has great power in his frame, especially in his arms, and a very powerful punch out of his stance. He does a nice job of maintaining low pad level out of his stance keeping his pad level low when his engages lineman. He has great grip strength and he can be a menace for offensive lineman when they try to detach him. He does a great job of one-arm stabbing lineman to prevent them from getting into his pads. He has extremely active hands as an edge rusher which helps him be one of the most technically sound edge rushers in the draft. He has an impressive swim move that he can use at will with his arm length and flexibility. He has a power push-pull move that is made even more effective with his arm length and power and allows him to shed blocks at will when he locks onto ball carriers. He has an impressive bull rush off the edge due to his low pad level, good power, and arm length and when he gets good leverage off the snap he can walk lineman back into the pocket and drive quarterbacks out. He has a very effective club-swipe move that he uses when he shoots gaps inside and takes on interior lineman. He has a great dip-and-rip move when attempting to bend the edge and it helps him shorten his path to the quarterback. He does a great job of going for strips when pass rushing and does a nice job attacking the throwing arm of the quarterback. When his pass rush fails, he does a phenomenal job of using his arms to disrupt passing lanes and bat down passes. He has a very high football IQ and does an excellent job of recognizing screen passes and making plays in the ball in the air. He has experience in coverage but I wouldn’t expect him to thrive in that role in the pros. In run defense, he does a nice job of holding his end of the line and forcing the running backs outside. He’s very good at being patient against read options and waiting for the ball to be visible rather than biting on the ball. He’s very good at disengaging from blocks when he sees the ball carrier, his long arms give him a good tackling radius to bring down backs from a distance. He’s a great tackler that gets down low and heads up when he can and has more than enough grip strength to latch and bring down ball carriers quickly. He plays with relentless effort and has a white-hot motor on the field and never quits on the play until after the whistle.

He's an average athlete at best which is why his technique and football IQ has to be where it is. While he has good flexibility, he struggles to get around the corner when going outside the tackle due to his lack of top end speed for an edge rusher. He doesn’t possess the pursuit speed to quickly run down ball carriers and has running backs turn the corner on him when he is defending the edge. He struggles at times to handle double teams as he doesn’t have the quickness and agility necessary to make himself slip through blocks. Doesn’t have much of a counter rush game yet in his arsenal and can have issues with getting by offensive tackles that can overwhelm him with athleticism. He only seems to play from a stand-up pass rusher position in a 3-4 scheme and I think his scheme versatility could be compromised a bit. Most of his production comes from lesser competition and you can see that when he plays against better schools like Ohio State or Michigan, his impact shrinks as the offensive line talent becomes better.

Boye Mafe has one of the higher floors among edge rushers in the draft because his technique is much more polished than most. He’s got the right work ethic and intangibles to make it in the pros but he’ll need some time to develop further before he consistently makes an impact in the NFL. If he can work on his athleticism and develop a counter rush game he could be a real threat off the edge for an NFL team.