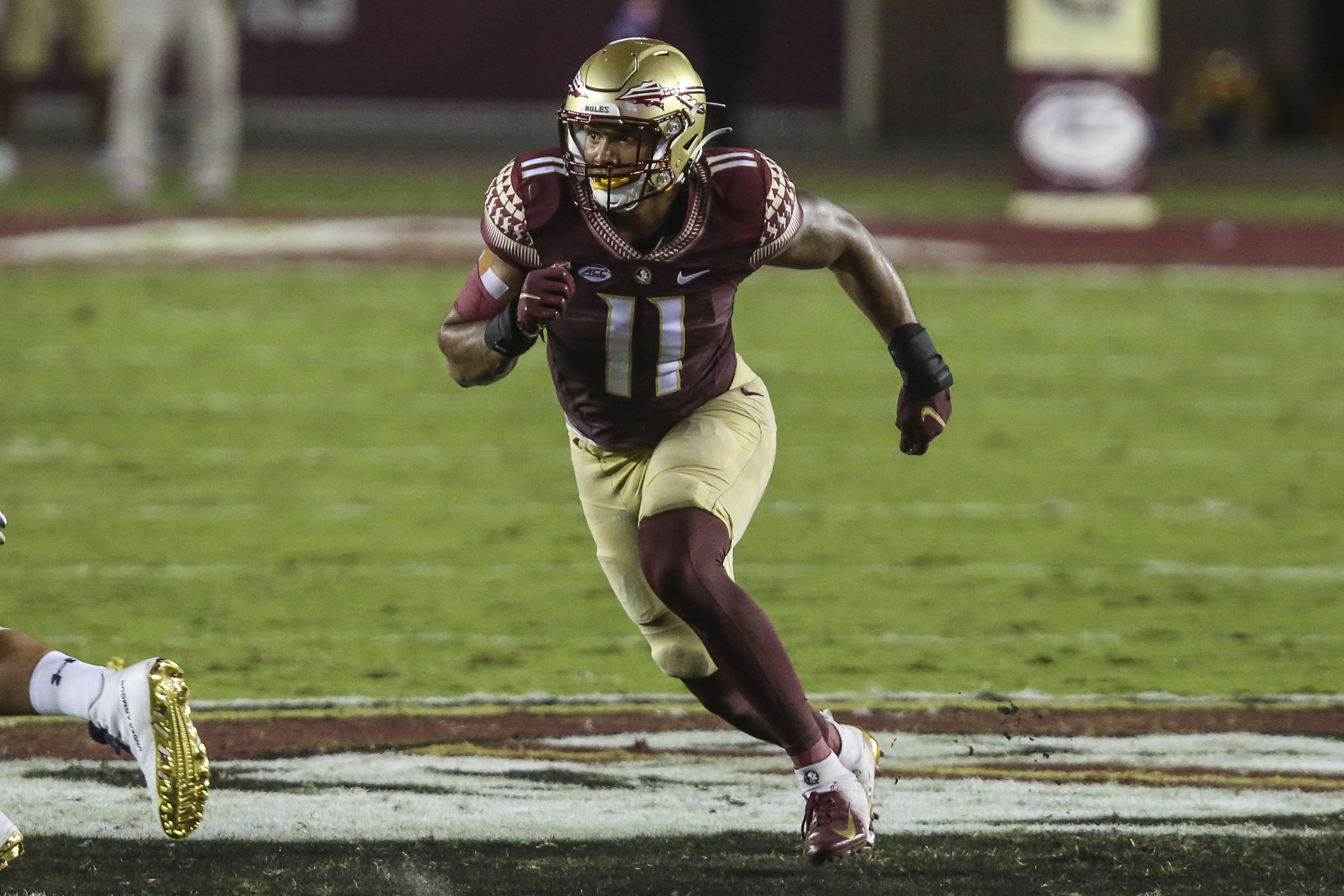 Photo by Gary McCullough-Associated Press
The Last Chance U star and stud edge rusher for the Florida State Seminoles has had a very interesting college football career. The former JUCO product brings elite size to the edge rusher position at 6'5" and 265 lbs. with an excellent blend of speed, length, and power. He has a good first step off the line that can absolutely overwhelm tackles early if they are just a tad late off the line. He does a great job of keeping his pad level low and usually wins leverage battles against taller offensive lineman. He brings power behind his punch out of his stance and his excellent length helps create distance between him and the offensive tackle  afterwards. He has good power in his torso and can get considerable push on offensive tackles with his bull rush. He has a very quick and powerful push-pull move that often seems to surprise offensive lineman with the speed at which he uses it. He has a very quick stutter and swipe move that has shown to be effective both inside and outside the tackle. He has good flexibility in his frame and when combined with his speed, he’s very effective at bending the edge on tackles running down quarterbacks. He uses a very good club-swipe move that can get him outside offensive tackles quickly and allow him to create pressure. He’s very twitchy for his size and shifting through the trenches to get into the backfield has been little trouble for him. He does a nice job of using his length to keep his chest clean when rushing the passer and can be a menace for lineman with shorter arms. In run defense, Johnson II does a great job of digging his heels in and keeping his outside containment. He’s very good at keeping his eyes in the backfield on running plays and not rushing into the backfield too early. He’s incredibly patient in run defense when he’s not engaged with lineman and has phenomenal explosion from a stand still position, allowing him to make plays quickly. He plays with a high football IQ in run defense and does a nice job of reading the rush before making his move. He can play from a 2-point or 3-point stance and even has reps from a 4-point stance when playing short yardage scenarios. He’s a good tackler with strong hands to latch on and bring down ball carriers. He’s a high motor player that has toughness and grit to match. He shows tremendous effort on the field is a sure thing to give his all on every play for 60 minutes.

He’s somewhat raw in his pass rush technique despite being a senior and he still has a ways to go before he becomes a complete player. He doesn’t appear to have a swim in his arsenal which is odd considering that most defensive lineman learn that move as foundation for the pass rush development. He doesn’t possess a spin either in his arsenal and will need to work one into his skill set to help him both escape offensive lineman as well as rush the quarterback without losing his stride or ground. He has shown issues with timing snaps in games which can cost him snaps by giving offensive lineman a head start to block him. He struggles with block deconstruction in run defense and often can get driven out of the play if he can’t break loose. He needs to improve his hand fighting skills because if his initial move fails he can struggle to consistently use his length to create distance from lineman attacking his chest. He doesn’t possess a counter rush move in his arsenal which makes sense given struggle to shed blocks. He doesn’t try to strip ball carriers when making tackles and will need work attempting to punch at the football. He can get caught in the wash in run defense when attacking inside the trenches and take himself out of the play. He doesn’t try to use his length at the line to bat down passes and disrupt throws and will need to learn to try and make a difference on the field outside of getting continuous pressure. He doesn’t bring much positional flexibility with very few snaps taken between the tackles and doesn’t have the coverage experience or skills to be an off ball linebacker which pretty limits his scheme to either a 4-3 or a hybrid defense.

The NFL has become increasingly infatuated with prospects that came from the JUCO ranks of college football because those prospects come out with more determination and discipline than most of the other prospects that get drafted. Being a JUCO product and working your way up to the top of the competition totem pole in college football and then becoming a standout player shows teams that a player that has taken the hard road to success and is willing to work to become better. Jermaine Johnson II has shown that in his play at both Georgia and Florida State and I have no doubts that he will get selected in the NFL draft. If he continues to polish his technique in his pass rush and start developing his awareness to make plays, he could be a quality starter in the NFL.