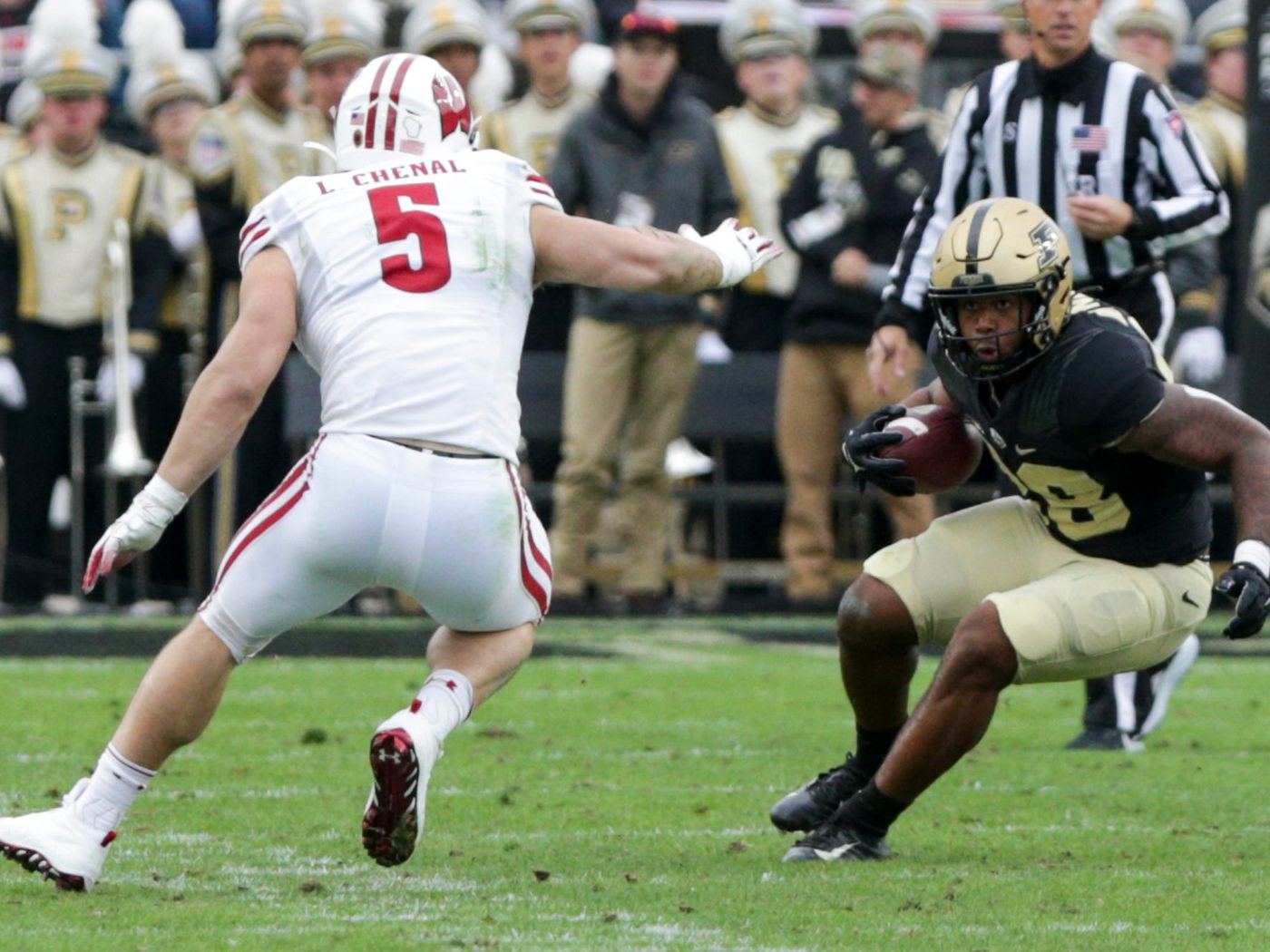 Photo by Nikos Frazier-Journal & Courier
Leo Chenal has been a fast rising linebacker prospect in the draft after putting together a great 2021 season for the Wisconsin Badgers and his stellar combine performance cemented his status as a early Day 2 pick in the draft. At 6'3" and 250 lbs., Leo Chenal possesses a herculean frame with muscles on muscles to go along with elite athleticism, immense power, and malicious style of play. If you're looking for a linebacker to add some attitude and toughness to the middle of the defense, Leo Chenal should be at the top of your list because he's a fast and powerful bruiser of a defender who's looking to turn ball carriers into car crash dummies with every hit. He's at home at the line of scrimmage in run defense where he's proven to be exceptional at reading offensive line movements and weaving his way through traffic to make a play. He's an excellent tackler with his size, athleticism, and toughness and when he gets his hands on ball carriers, they go down quickly. He hits like a freight train when he gets good shots on ball carriers he can make helmet denting hits. He plays very low in his stance in the front seven and looks very comfortable moving around in it. He's proven to be exceptional at the point of attack when engaging with offensive lineman and against Iowa proved to be quite the handful for top NFL prospect Tyler Linderbaum which shows his level of competitiveness and potential as an NFL linebacker. He's stout in his attack and when he takes on blockers his powerful build allows him to halt run blockers and shed blocks to make plays. It's very rare to see a linebacker come downhill and bull rush through offensive lineman the way he can and his ability to do should get teams excited about his ability to patrol and defend the line of scrimmage. His burst out of his stance when he attacks the line of scrimmage is explosive and if you don't have him checked on a play when he attacks, he's more than capable of blowing it up.  He really showed teams his ability as blitzer and pass rusher in 2021 with his surprising pass rush technique and part of his rise in the draft is the potential for him to be a hybrid pass rusher. You can't block him with a running back in blitz pickup because he's too big, fast, and strong to be upended and his aggressive style of play is hard to block effectively. He's very quick going forward as a blitzer up the middle and has overpowered quite a few interior offensive lineman with his strength when attacking the line of scrimmage. He has some decent flexibility and bend in his frame to squeeze through gaps in the line and potentially bend the edge although I doubt his ability to rush off the edge consistently. He has a great punch at the point of contact and can shock offensive and get them off balance which allowed him to be very successful in 2021 at getting him the badgers defense. He's very good at attacking the football when making tackles and was successful on a couple of occasions in 2021 at stripping the football. He's as relentless a player as you'll find in the draft with his all-gas-no-brakes approach to the linebacker position and you can count on Chenal to give your team 150% of himself to make a play. He's tough and rugged for the linebacker position and he certainly is battle tested with his play against some of the best offensive lineman in college football.

Leo Chenal isn't going to wow teams with his coverage abilities in practice and will need heavy coaching in this area to become a three-down NFL linebacker in his career. He struggled mightily with matching up against tight ends and receivers in zone coverage not just because he lacks the fluidity in his lower half. Too many occasions of him being out maneuvered by tight ends in the slot picking the line to gain by using their size advantage over him and slot receiver have made mincemeat of him. He has short arms for his size and they help him much when it comes to defending passes or trying to disrupt throw's. I didn't see much ability in zone coverage to read offenses and decipher where the quarterback wants to go with the football. He doesn't possess great range or burst on the football in coverage and too often is caught guessing and coming in late on passes. His short arms don't allow him much room for error when tackling shifty running backs and while he hasn't found himself getting juked out in the one much in college it could be a rough start to his NFL career if he struggles against NFL offensive weapons. \

Leo Chenal probably isn't a three down inside linebacker in his NFL career but I certainly can see teams getting curious about his ability as a pass rushing inside linebacker after the success in 2021 of Micah Parsons. Chenal has all the intangibles and traits, outside of arm length, to be a very good linebacker in the NFL and if he never learns how to cover at an NFL level he could have a future as roaming pass rusher for a defense.