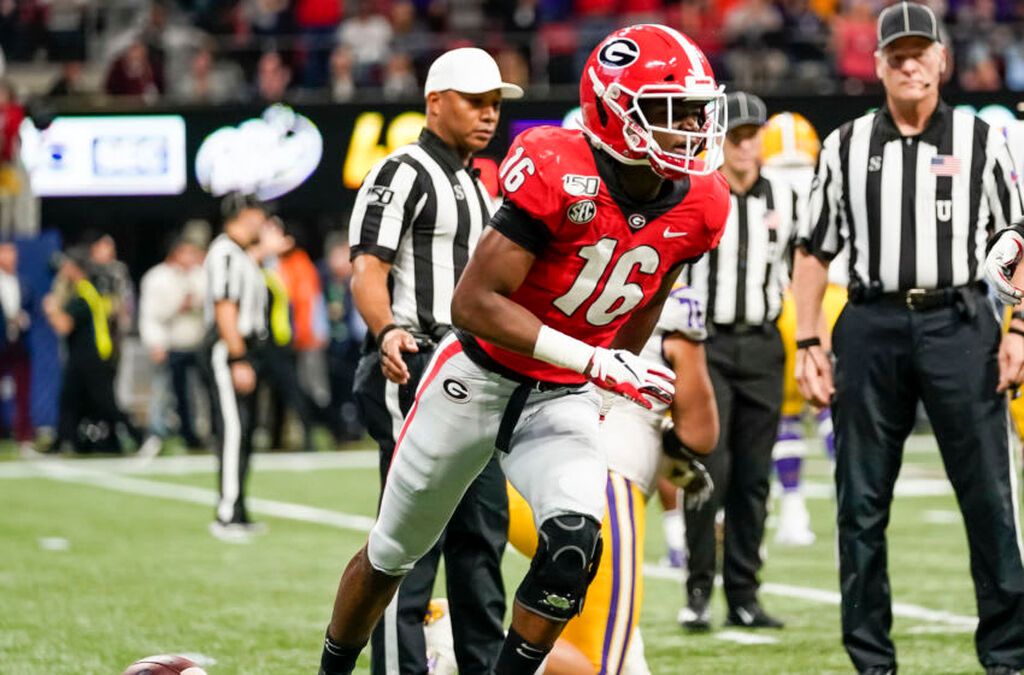 Photo by Steve Limentani-ISI Photos via Getty Images
The 2021 Georgia Bulldogs defense will go down in college football history as one of the greatest in NCAA history with talented NFL prospects all over the unit but lost in the shuffle of immense safety Lewis Cine but all that changed after his NFL Combine performance that has sent his draft stock flying. At 6'2'' and 200 lbs., Cine brings elite athleticism, malicious physicality, and good zone coverage skills. He possesses elite range at the safety position and this has helped maintain air supremacy for the BullDogs defense. In zone coverage, he never seems to be out of range of making a play whether it's a broken up pass or a tackle far from him. He can cover a very large area and often was given single-high safety duties for his defense. He explodes out of his stance when he sees the ball in the air and is often the first line of defense when making a tackle after the catch. He does a great job of attacking the football at the catch point and does a great job of punching and clawing the football away for incompletions. He gave his cornerbacks on the field the freedom to man up on their opposing receivers with relative ease with his consistency to come over the top if need be and allowed his defense to get an extra second to bring down the quarterback. He follows the eyes of the quarterback fairly well and he did a nice job in 2021 of consistently finding himself around the football. He could be one of the best run defenders in the draft because his job was literally to play in the box on most plays and simply making tackles when possible. He's much stronger than his size would indicate and he's certainly shown an ability in college to wrap up and slam ball carriers quickly to the turf. He has strong hands to hold on and wrap ball carriers of all shapes and sizes and doesn't get thrown off once he locks on. His hits in run defense and over the middle brings back memories of Jack Tatum or Ronnie Lott obliterating receivers and running backs alike and he certainly was the tone setter for the college football defense in history when he made contact. He's as tough a safety prospect as you'll find in the draft with his fearlessness and physical style of play and should be a coach's favorite early in his rookie campaign.

He's far too light in his frame to be making the hits he does on the field and I would suggest a team add at least 10-15 lbs. of muscle to his frame to better withstand the punishment he takes and delivers. He may have had one of the best safety positions in college football history with his front seven creating absolute havoc every play and he rarely saw passes that went according to plan. He has a tendency in my opinion to get a little lax in coverage at times due to his defensive front destroying offenses and occasionally is late to his spot in coverage. He goes for the big hit a little too often for my taste and wrapping his target should be done with more consistency. His ball skills are severely lacking for a safety with his skill set and physical traits and he'll need major help in the NFL with trying to retrain his ability to come down with interceptions. He doesn't angle himself constantly to attack routes and put himself in a position to create a turnover. Too often he is simply throwing in the towel on contested catches by knocking away passes and robbing his defense of turnovers down field. By no fault of his own, he was rarely used as a blitzer with his only real experience in the backfield being from covering screens and dump off passes and NFL teams are going to have to potentially work considerably on how to attack the trenches. He can tackle high on ball carriers occasionally in run defense and getting lower and tackling through the hips can be done more consistently. He is more instinctive in his decision making rather than recognizing offensive passing patterns and his football IQ on the field is questionable given the advantageous situation he played in. Few plays that saw him play outside of his position and I don't expect him to be any sort of chess piece in the NFL. No forced fumbles in his career is worrisome for a safety that plays as hard as he does and learning how to strip the football with consistency will benefit him greatly in his career.

He's a project at the safety position in my eyes because I can't figure out how much of his success was because of his surrounding team. Normally you can pick out 2-3 players on a really good defense and sell the idea that each one could have lived without the other making plays but Lewis Cine was on a defense that could have 6+ Georgia BullDog defenders selected in the first 75 picks of the draft before he potentially heard his name called. I think he's a tough and rugged prospect that's going to give punt returners nightmares when he's gunning for them, but a team may not know what they have or what he can do until he sees action in practice that doesn't have one of the best front sevens in football. He's boom-or-bust in the draft with as high a risk/reward factor I have seen in this draft.