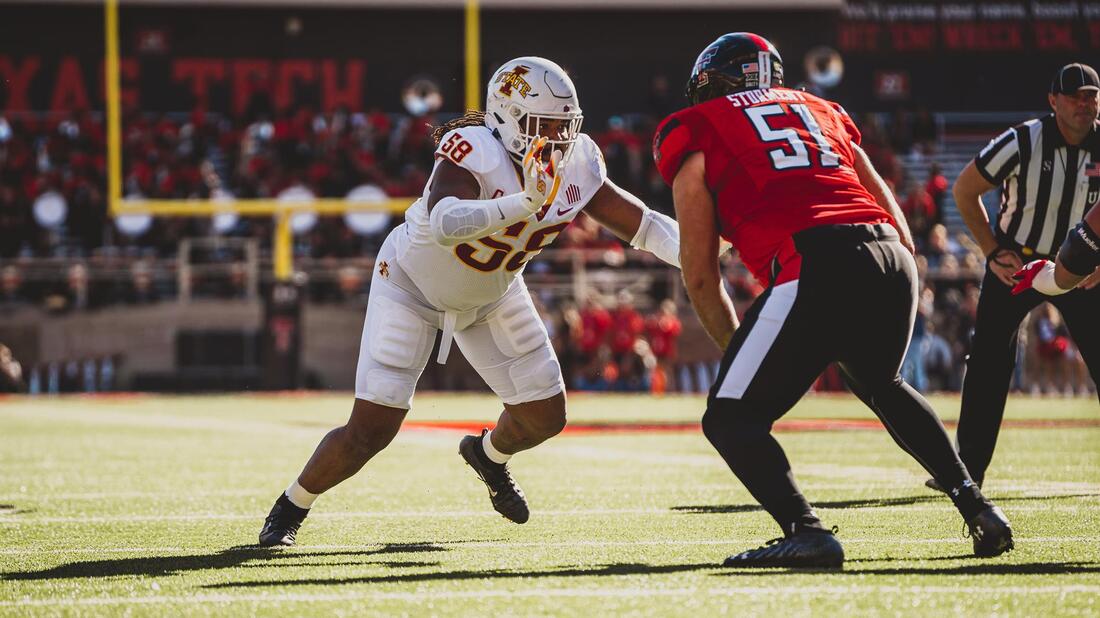 Photo by Jeff Spaur-Iowa State Athletics
One of the most slept on defenders in the NFL draft is Iowa State defensive tackle ​Eyioma Uwazurike who was one of the leading sackers from the interior in 2021. At 6'6" and 320 lbs., Uwazurike brings elite length, exceptional explosiveness, and tremendous pass rush technique. He comes off the line with a very good first step and he possesses one of best punches in the NFL draft that is both extremely accurate and has potent power behind it. He's very good at attacking the chest of his opposing offensive lineman very quickly and knows how to use his extremely long arms to drive them back into the pocket. He uses his impressive arm length to its fullest extent when punching offensive lineman and he can dominate interior lineman with ease. In his pass rush, he has a very good repertoire of moves that are polished and win with consistency. His main move off the line is his slap and swim move that is made deadly with the use of his length and quickness as an interior lineman and this move has even proven to be effective on the edge against offensive tackles. He has great push pull moves with his power and lengthy arms that have made quick work of offensive lineman that can reach his chest and it has helped shed blocks at will in the trenches. He plays the interior like an edge rusher as every movement he makes is in an effort to set up his next move and it allows him to wreak havoc in the backfield. He's a crafty hand fighter in the trenches that can snake his hand into his opponents quickly and has shown to have a good grip when he locks in. He's made his money in college football not with his initial rush but with his counter rush moves and clean up maneuvers. His counter rush moves are among the best in the draft with his arm length and hand fighting ability which allows him to keep distance from the hands of opposing lineman and work his way out of a potentially failed initial rush move. He's great at playing clean up in the pass rush as he has great awareness of the quarterback in the pocket and can take great angles to make the sack in the backfield. In run defense, he's proven himself to be a very good gap shooter in the interior of the line. He's good at creating clogs in rush lanes that often force running backs to cutback and out of the hole. He plays tough in the interior in run defense and doesn't give up ground easily. He reads running plays very well and does a great job of moving with the flow of traffic. He's played all over the defensive line in college football and has experience in 4-3, 3-4, and hybrid schemes so he'll be a fit on any NFL system. He's had some of his best outings against college football's best players most notably Trevor Penning and Tyler Linderbaum who are likely to be Top 20 picks in the NFL draft. Uwazurike is a tough and highly competitive defensive lineman that will get fired up very easily in a game and when he makes a play he's good about energizing his teammates around him.

He's not a defensive tackle that is going to run down ball carriers much in the NFL as he lacks the speed to do so both on tape and in his 40 yard dash. He can get careless with his pad level at times and struggles to begin with as a 6'6" interior lineman and will need to keep his pads low with more consistency. He could do a better job working through double teams in his pass rush as too often he gets stalemated and is unable to break away and continue his just. Not the strongest tackler in the class as too often his long arms and hands get slipped in the interior and may need to hit the weight a bit in training to add more power to his arms and chest. Needs to do a better job of using his size and length to attack passing lanes when his rush fails as his ridiculous arm length tall frame make him a great player to have performing such a task. His high pad level and average core strength for the position has caused him to find himself getting mauled on occasion by offensive lineman and again developing more consistency with this trait is necessary for his NFL success. He's not very flexible as an interior lineman and certainly won't be bending the edge anytime soon. Too eager to rush up field for the sack and which has often led to draw plays or quarterbacks climbing the pocket and taking off. He benefited greatly from teammate Will McDonald garnering most of the attention from defenses and a great deal of his sack production came from the quarterback spending too much time in the pocket. He possesses average lateral quickness for a defensive lineman and can struggle at times moves that involve finesse early in his get-off. He can get caught in the wash on occasion and learning to keep his eyes focused on the ball carrier with more consistency will help a great deal. No forced fumbles in his career and he'll need to learn how to punch out the football and strip ball carriers.

If Eyioma Uwazurike had run a decent 40 yard dash at the combine or his pro day we would likely be talking about him as a Top 50 player but because he didn't he's found himself as a potential late Day 2 pick. He reminds of former Seattle Seahawks defensive end Michael Bennett who, like Uwazurike, played everywhere on the defensive line and didn't win matchups with speed or athleticism but technique and length. Uwazurike could be a good core player on a defensive line for a team within his first few years in the league if he can fix some of his flaws, most concerning of which would be his pad level. If he can do that, a team has a quality player at a discount in the draft.