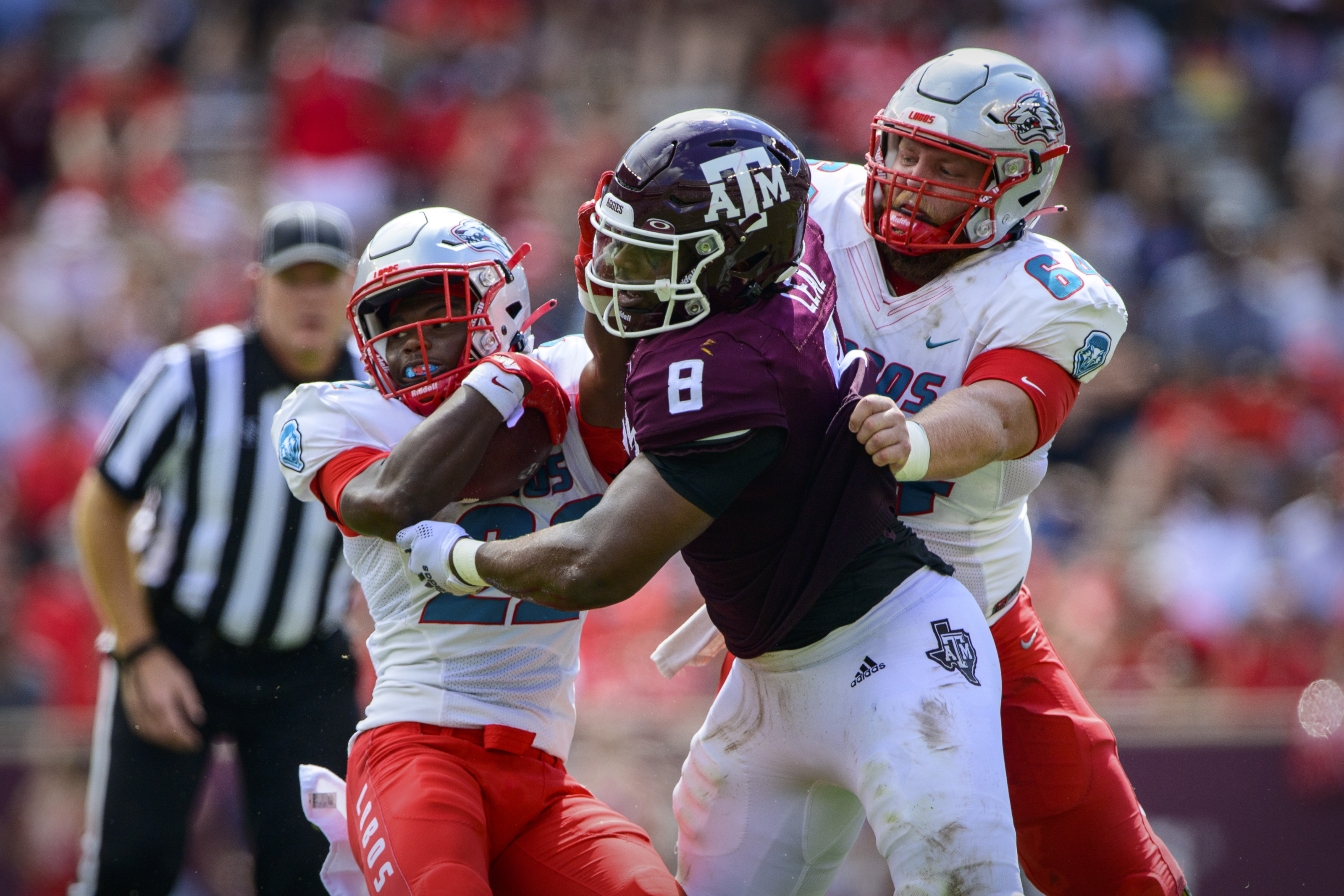 Photo by Jerome Miron-USA Today Sports
DeMarvin Leal is widely regarded as the best defensive lineman in this year's draft and it's easy to see why just by looking at him and his game tape. At 6'4" and 290 lbs. Leal brings rare elite athleticism, tremendous power, and excellent length to the defensive line. As pass rusher, he possesses excellent explosiveness off the line at the snap allowing him to get into his opposing lineman's chest early and quickly toss him out of the way as well as shoot gaps in a flash and penetrate the backfield very early in a play. He comes off the line with great pad level and when he can convert speed to power early in his rush, he overwhelms offensive lineman early. When asked to play on the edge, something he did more frequently than most other defensive tackles, he showed shocking flexibility at his size to bend the edge and squeeze gaps in the line, making a difficult man for offensive lineman to game plan for. He has more than enough power in his frame to walk them back into the pocket quickly. His punch off the line is immensely powerful and can upend and topple offensive lineman if he catches them off guard. He has good length in his arms to make him a mismatch against interior offensive lineman as well as hold his own against long armed tackles. He did a phenomenal job of expanding his pass rush move repertoire and putting all his moves together with excellent timing. He possesses an excellent swim move off the line that's proved to be a consistently potent weapon of his when combined with his speed, power, explosiveness, and flexibility. He's a very violent hand fighter with his aggressive and quick clubs and swipes when offensive lineman try to get into his chest pads and he's shown himself to be a load to handle when lineman try to keep their hands on him. He has a very effective dip-n-rip move both on the edge and in the interior that can quickly turn offensive lineman into turnstiles. He has a stutter step and swipe maneuver that not only can be effective inside against guards and centers but also on the edge if he faces an athletically average offensive tackle that struggles with his speed and size. He clearly has worked on a counter-rush spin move when his initial move fails and while it's work in progress, it shows his great insight into his game and what he needs to improve. He has a great push-pull when lands his punch inside the lineman's chest and has shown the ability to ragdoll offensive lineman out of the way of his rush when he can get great leverage. When his rush fails, he's very active with hands in the air as he can and will bat down passes in his area. He does a phenomenal job of ripping through double teams against him with his immense power, flexibility, and speed and when he locks onto the quarterback in his rush very few quarterbacks can run away from him. As a run defender, he possesses immense power in his upper and lower half to not only hold up against the run, both in the interior as well as on the edge, but also power through offensive lineman and create chaos in the backfield. When he digs his heels in the ground at the line in run defense he can be a tough lineman to move. He has exceptionally quick hands and always works to keep offensive tackles out of his chest. He has a very strong grip that helps him bring down ball carriers at the line and keep his grip on lineman's chest pads and rip them aside when he locks onto the running back. He has phenomenal speed and agility for 290 lbs. and it shows when he's in pursuit of the ball carriers. He can somehow change direction on a dime with his rare agility and balance and when he gives chase to running backs, he can run them down like a tiger chasing a gazelle. He takes great angles in run defense when in the open field and has been seen giving chase 20+ yards past the line of scrimmage. He's a sure-handed tackler with a vicious mean streak when he brings down ball carriers and will slam opposing running backs and quarterbacks, legally I might add, when he gets his chance. He's a very cerebral defensive lineman and does a tremendous job of keeping himself aware of the football on the field, checkout his interception against Alabama to see just how much of a nose he has for the football. He's always been singled out by offensive coordinators and is usually facing double and triple teams which allows his teammates to take advantage.  He's a highly versatile defensive line prospect with snaps at 3-tech, 1-tech, nose guard, 5-tech, and even as a stand edge rusher and 4-3 defensive end which opens up the floodgates for him with teams in need of defensive lineman due to his scheme versatility. He possesses a non-stop motor that made him so difficult for offenses to game plan for and match up against.

He needs to develop more of a counter rush game because when his initial move fails he can sometimes give up and look for the batted pass rather than rework up field. He can have issues disengaging from offensive lineman that utilize power in their upper-body and learning how to shed blocks better with more consistency would benefit his pro career greatly. He's utilization all over the defensive line could be as much of a detractor as it is a benefit as teams could look at him as a jack-of-all-trades but master of none on the defensive line. Despite his edge presence in college football, I think his home has to be in the interior where his physical and athletic traits can better suit him against guards that struggle against.

DeMarvin Leal came into Texas A&M as the best defensive player when he was a freshman and showed this year that he's one of the best interior defensive lineman in the draft. He was an absolute nightmare for teams to prepare against in college football and he gave offenses fits with ability to simply overwhelm guards and centers in one-on-one matchups which opened up the trenches for blitzing linebackers. I think that if he gets paired with a defensive coach that runs a 4-3 defense as 3-tech and uses him to create mismatches in the trenches, he could be a very special rookie and a top choice for defensive rookie of the year. If he can polish his game up a bit and fall into the lap of the team, he has perennial pro bowl potential in the NFL and could be a game-changing player for an NFL team.