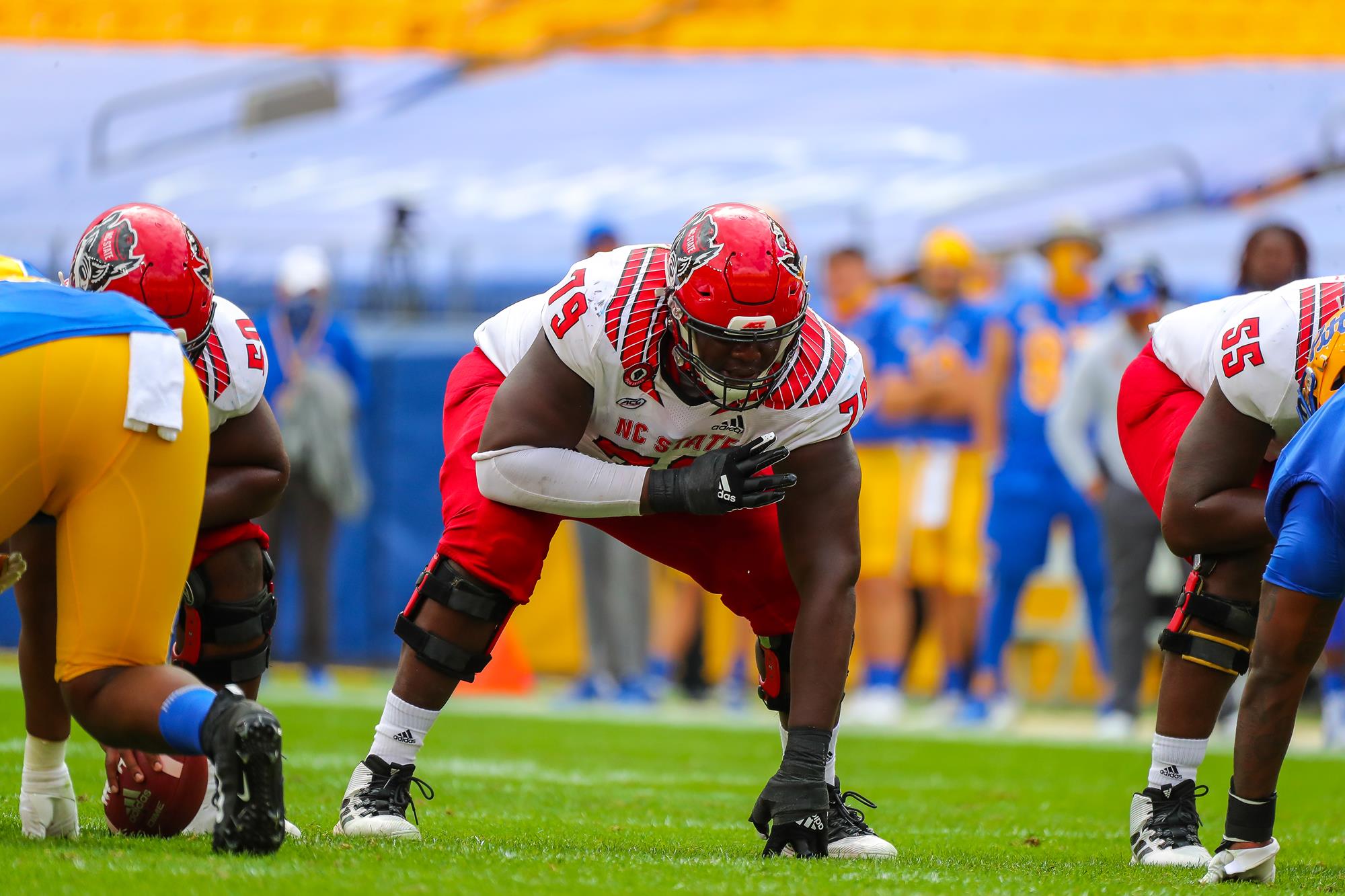 Photo by North Carolina State Athletics
More than few offensive lineman have skyrocketed up draft boards this season but none more than North Carolina State's left tackle and guard Ikem Ekwonu. Ikem Ekwonu brings good size at 6'4" and 325 lbs. with exceptional athleticism, rare arm length, immense power, unprecedented versatility, and a mean streak that wore down some of the best defensive lineman in college football. He's one of the best offensive tackles in the draft and probably the best guard in the draft which makes him one of the most valuable offensive line prospects in the draft. He's one of the most aggressive and violent lineman in the draft, on both sides of the ball, and his raging bull style of play is a huge reason as to why was so successful in college. In pass protection, his top level athletic ability made him so difficult to pass rush against. His time spent playing guard in college football has given him tremendous pad level for an offensive tackle and his ability to consistently win the leverage battle is what has made him such a great player for N.C. State. He's extremely explosive in his kick slide ensures that very few pass rushers can get his outside shoulder to bend the edge and when he lands his punch as they try to run by him, guys have been tossed aside. His punch when he's lined up against opponents is devastating and has ended pass rushes early just by hitting his target on edge rushers. His punches are very fast, accurate, and timed very well and he made quick work of pass rushers that couldn't avoid make him miss. He has tremendous footwork out of his stance with excellent agility and quickness in his feet and mirroring speed rushers off the edge has been a non-issue for him. His ridiculous arm length is one of his most notable traits on film because defenders just seem to be unable to reach and grab his chest pads and his ability to keep his chest clean from defenders has helped him tremendously. He has excellent hand fighting skills when edge rushers try to work his arms out of the equation on their pass rush and he does a great job violently clubbing, swiping, and knocking away punches off the line, making every rep against him feel like an eternity. He does a great job of using all of his arm length when extending out to punch or attack the chest of defenders which allows him to win a lot of his reps early. He has excellent hand strength when he locks onto chest pads and violent demeanor and technique helps ensure that it's game over for pass rushers when they can't evade him. He has a phenomenal anchor in his lower half with his excellent flexibility and power in his legs and halting and subduing bullrushes almost looks easy for him. He's always looking to make his pass protection reps into wrestling matches, Ekwonu was a phenomenal heavyweight wrestler in high school, and he will throw, plant, and drive his opponent onto the turf if he sees his opportunity to do so. He was excellent at protecting himself from blitzers, stunts and twists from the defense and did a great job of assisting his left guard when he was targeted by defenses. Ikem Ekwonu made his bones in the run game for N.C State and it's not a stretch to say that he's the best run blocking tackle, and potentially guard in the draft. He plays an old-school malicious style of football when asked to create holes in the defensive line and he's the best in college football at moving edge rushers against their will. He comes out of his stance with immense power, momentum, and nastiness that completely overwhelms his opponent early. He plays with excellent pad level out of his stance which allows him to consistently attain the better leverage and he has exceptional power in his base to quickly drive his man off the line. His violent punch allows him to stun and quickly take control of defensive lineman and he has more than enough power in his upper half to physically move players and create holes in the lane. He can collapse his side of the line to allow outside runs to happen without difficulty and he's excellent at turning his edge rusher out of the rush lane to give the running back a clean gap to hit. He has the athleticism to reach the second level and stay with blocks on linebackers and receivers but this is where his nastiness shows itself with his ability to serve pancakes all day like an IHOP. He's very good at breaking away from double teams and getting up field to lead convoys on big runs which is something he does regularly for the Wolf Pack. He hits second level players with everything he has and has quite the highlight reel of him running over or blowing linebackers and defensive backs to break open huge runs. He was a tone setter in the run game for N.C. State and he imposed his will against some of the best edge rushers and defensive lineman in college football. He has a high football IQ made evident by his positional versatility, technical prowess, and development which should make him a hot commodity for all 32 NFL teams come draft. He plays with a white-motor and viciousness that only the best NFL players possess and his relentless effort and toughness will make him a coach's dream in the NFL.

He has issues at times with getting over aggressive in pass protection as he can look for the kill shot on his opponent and can be susceptible to inside moves and occasionally blitzers. He can too often try to pancake defenders when run blocking rather than subduing and moving onto the next block. He can overshoot on his kick slide in pass protection which has caused him to leave his inside gap wide open for his opponent which has cost him on a couple of occasions. He has some bad weight around his belly which can hinder his ability to recover from overshooting his opponent and potentially giving up his inside gap but at this point I'm just nitpicking to add more content.

Ikem Ekwonu is one great combine performance away from securing himself a very high selection in the NFL draft and I would be shocked if he didn't turn heads the moment he walks into the building. He's an exceptional prospect that could be a game changer for an NFL team on their offensive line. Great versatility as an offensive lineman is becoming one of the most sought after skills a lineman can have in the draft with Tristan Wirfs, 2020 1st round pick and Super Bowl Champion offensive tackle for the Bucs, and Rashawn Slater, 2021 1st round pick by the Chargers and stud offensive lineman, both having the same level of versatility and each have been exceptional players early in their career. Ekwonu is a better prospect than both players coming out the draft and whatever offensive line he gets plugged into will be very much improved. He has perennial pro bowl potential at two positions and could be a HOFer when his career is over with.