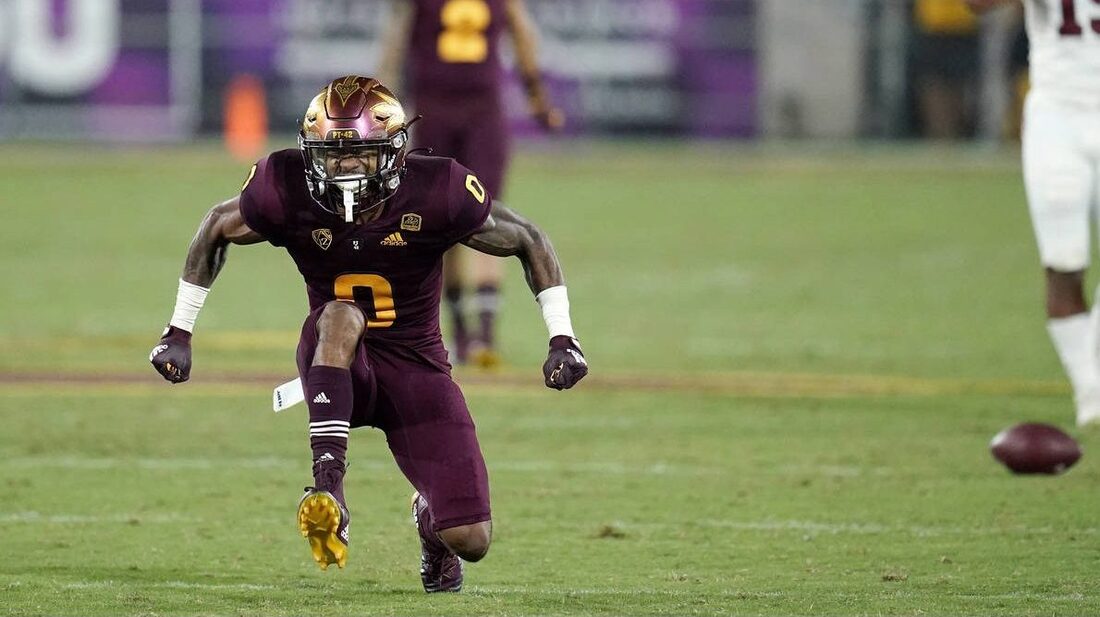 Photo by Ross D. Franklin-Associated Press
Arizona State had a decent season defensively in 2021 but their most productive defender by far was cornerback Jack Jones who has been one of the most underrated defensive backs in the entire draft. At 5'11" and 171 lbs., Jones brings excellent ball skills, great coverage technique and elite level football IQ. In man coverage, Jones displays exceptional when playing off his receiver as he doesn't bite stutter steps or sluggo routes. He has exceptional footwork in his back pedal that allows him to stop on a dime and change direction at will as soon as his receiver breaks on their routes and has phenomenal quickness and agility to stay glued to them in their routes progression. He's played a variety of receivers of all shapes and sizes in both his USC and ASU career and has found success against everyone despite his size limitations. He's technically sound when having to play close to his man whether it's on a deep ball or short routes and does a great job attacking the football in the air with them. His high defended pass numbers show a player that's rarely off the mark in his coverage and has tremendous consistency in his play. If he does find himself beat on a route he has incredible recovery speed to get back into position to make a play on the football and often did for his defense. Not easily bullied when in press coverage due to his tenacity and aggressiveness for his size and while he certainly won't be riding guys out of bounds, he doesn't give up much ground on the route either. In zone coverage, he's exceptional at reading the offense pre-sap, recognizing route concepts, and attacking the pass at great angles to ensure he has his best chance to make a play. He possesses very good range due to his high football IQ when knowing where to be in his coverage and has enough explosiveness and agility to  disrupt the pass or meet the receiver at the catch point for a quick tackle. He's rarely out of position in zone coverage and has a clear understanding of how to play the cornerback position either on the outside or in the slot. He's not one to fall for trick plays, boot legs, or even the occasional look-off or pump fake in his direction given his level of focus on the field and how much of a student of the game he is. He's an elite ball hawk in this draft and teams looking to boost their interception production in 2022 need to have this player high on their board. He has very sticky hands to come down with the pass and he's extremely aggressive at the catch point which has helped both come down with interceptions as well as defended passes which certainly shows up on his stat sheet. He doesn't discriminate when it comes to getting scrappy in the air with receivers and tight ends and you can be sure that even in a losing effort, he'll do his best to claw at the football. In run support, he's a fearless honey badger like player that will attack the line of scrimmage to make a tackle in the teeth of the trenches and is an aggressive hitter when has his shot to do so. He's a technically sound tackler in the open field and he has had tremendous success in college at forcing fumbles for his team which allows him to potentially change a teams fortunes in a game at any moment. If you want to see what high football IQ and a selfless style of play looks like check out his play at Stanford that saw him pick off a football and while he's getting tackled he tossed it to his teammate who ran it in for touchdown and if that isn't the epitome of a football play by a player, I don't know what is. He's a tough and highly competitive cornerback prospect that clearly has an advanced understanding of the position which shows his excellent work ethic to become a better player.

He's lanky framed cornerback with average athletic ability and teams are likely to be scared off by this. He doesn't possess the long speed to effectively run with receivers on the outside and likely will be regulated to slot corner duties exclusively. His length is also a concern as well with him becoming overwhelmed at times by bigger and faster receivers in the field. He's never going to be the betting favorite on contested catches, despite his scrappiness at the catch point, and shouldn't himself be covering receivers in the red zone outside the hash marks. Not a great deal of vertical takeoff for his size and won't challenge tight ends for much when attacking the catch point in the red zone. He's a non-factor in press coverage at time's depending on his matchups due to lacking power in his frame and is much better suited to play off man or zone exclusively in the NFL. While his vigor and toughness in run support is certainly admirable his longevity could be an issue for him given his lacking size and muscle in his frame and hitting ball carriers the way he does will affect his availability. Not much of a blitzer in his career and could struggle a bit as one in the NFL. Had some issues in his USC career with academia and then the law which forced USC to cut him that year and although he appears to have gotten his act together as ASU, teams need to do their due diligence on his character before they consider drafting him.

They say football is 90% percent mental and 10% physical and if there was a player that embodies that saying it would be Jack Jones. Yes, he's not the biggest or the fastest player on the field and his off field issues need to be put under a microscope and examined but this a player with a high floor as a slot cornerback prospect and if he can get more athletic, I certainly can see him transitioning outside in his career. He has football speed for prospects once he puts pads on and gets out on the field and his combine measurables won't matter much to teams if he can haul 3-4 interceptions a year. It all comes down to his ability to stay out of trouble off the field and whatever team takes needs to keep an eye on him. I see him as an early starter in his career that could turn into a quality player down the line in the slot.