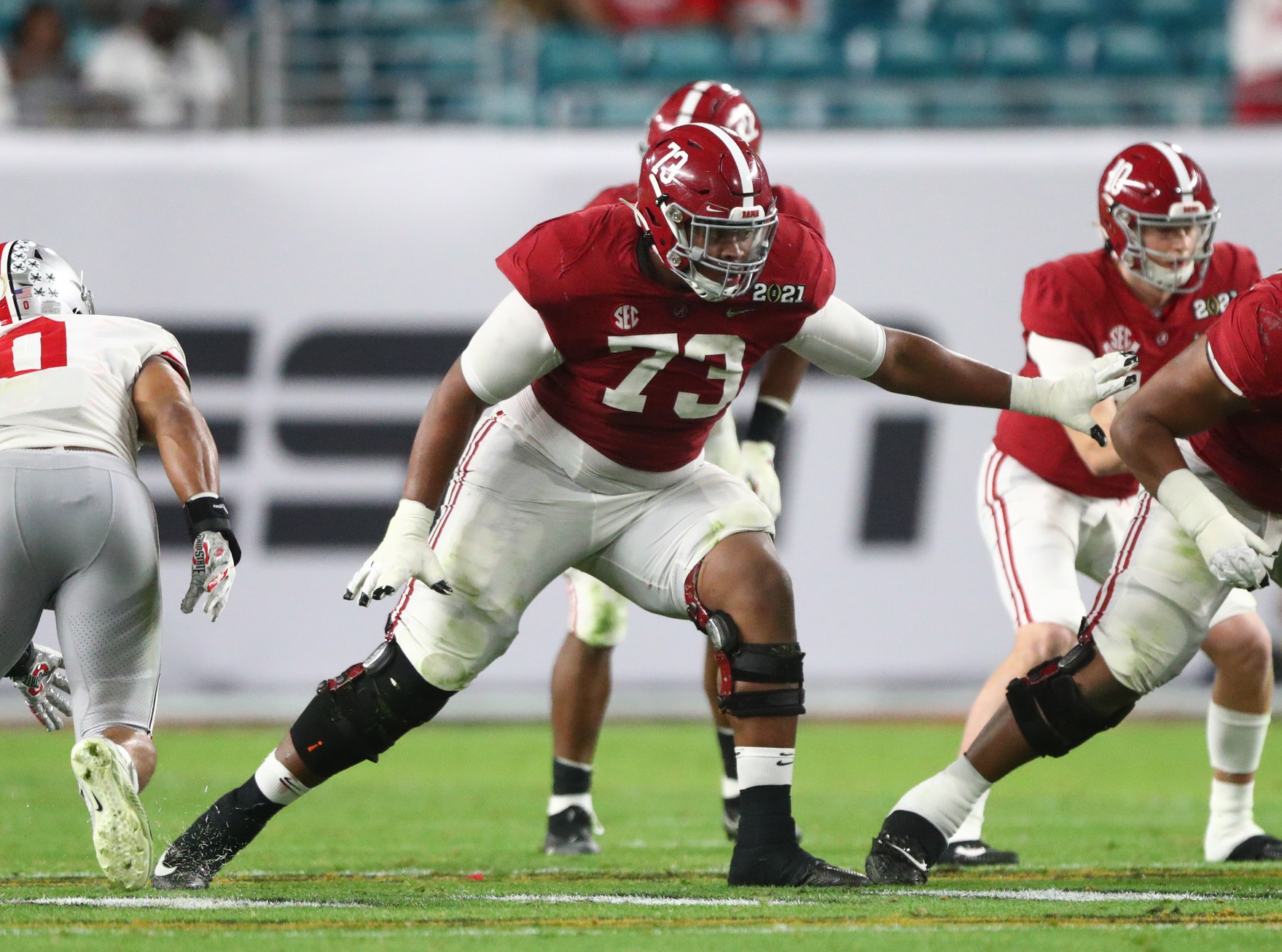 Photo by Mark J. Rebilas-USA TODAY Sports
There always seems to be an Alabama offensive lineman in the Top 10 of the draft but Evan Neal has a chance to be the best to ever come out of Nick Sabans Crimson Tide. Evan Neal is a goliath of an offensive tackle at 6'7" and 350 lbs. with super human athleticism and an elite level work ethic amongst the big men of the draft. He comes from a long line of NFL players and possess great bloodlines. His journey to Alabama shows just how hard he works as a person, let alone player, from his weight loss journey, he was just a tad under 390 lbs. when he was getting recruited in high school, and him losing almost 40 lbs. to make the team shows his level of commitment and work ethic to the game of football. Evan Neal is tsunami in the run game when he's charged with leading the convoy in the run game, there isn't a defensive player in college football that can stop him. He plays with great pad level, even at 6'7", and when gets at some leverage at the point of contact, defensive lineman just get mauled. He has exceptional length in his arms given his size and rarely finds himself getting out reached. He possesses freakish power in both his upper and lower half and hasn't seen a defensive player that can bull rush him in college football. He has excellent power in his arms as well as his hands and when he puts the clamps on a defensive end, it's game over. His punch is powerful and accurate which makes stunning defenders at the point of contact a relatively easy task. He's at his best when turning defensive lineman out of the hole when his size and agility are too much for even the strongest lineman to handle. He has unreal straight line speed for a 350+ lbs. man and is a scary offensive lineman to deal when he's going forward. He's a mean player when he's ask to single block defensive tackles and will plant defensive lineman in the ground if he has a chance to. He does a great job of getting to the second level and will wreak havoc on linebackers and safeties when he gets his hands on them. When in pass protection he has good agility for a big man and can keep up with speed rushers that try to bend the edge on him. He has good flexibility for a man his size and can bend a little bit to handle bull rushers off the line. He possesses more than enough power in his punch in pass protection to toss edge rushers to the ground and enough accuracy and precision in his punch to make it a consistent part of his game. He possesses great hand speed and rarely allows his opponent to get into his chest. He's at his best in pass protection when he can explode out his stance and tag edge rushers that try to bend the edge on him as it often leads to them eating dirt. He's an immovable object when he plants his feet in the ground and doesn't move much when getting bull rushed. He's quick off the snap and explosive when he kicks out of pass protection. He understands blitz pickup off the edge and makes sure to keep his inside gap clean when defenses try to attack the middle. He can be a menace for defenders if the quarterback holds onto the ball and has shown no problem playing hard when the play is extended. He's practices against NFL talent at Alabama and he plays in the SEC which features some of the best pass rushers and defensive players in college football which means he's more seasoned as a offensive lineman than most coming out of college.

His size can catch up to him when asked to mirror edge rushers that utilize explosion and speed over power and leverage because the elite speed rushers in college football can occasionally get the jump on him. His lateral agility is average which is expected for a man of his size but it's a hole in his game that teams will capitalize on. He can get caught lunge towards his man if they can take the edge and while he has enough length to make it work, it will need to get corrected. He can be a little too head strong when driving up field and miss his man in the second level occasionally. His average lateral agility can hurt when attacking the second level as safeties and linebackers can slip by him when he's going forward. He's a little raw in his footwork in pass protection as he's heavy footed and can have wasted motion at times when mirroring his opponent. He's only started two season for Alabama and switched from right to left tackle in 2021 so covering his quarterbacks blindside is still relatively new.

He's the best offensive lineman prospect in this draft and their isn't a close 2nd currently and while his technique is raw, he makes up for it with his athleticism. Neal's work ethic, athleticism, and his level of competition make him a can't-miss prospect and once he gets his technique sharpened and given a year to play left tackle, a team could have a perennial all-pro player for a decade. He should be a Top 5 pick in the draft and could be a game-changer for an offense once he gets comfortable in the NFL.